LAST week’s auction market rally after months of rollercoaster prices was followed by a firm tone this week and more forward trading.

This was in stark contrast to the macro-economic situation that has markets gyrating from confidence to despair off the back of contrary information on the implications of the Omicron COVID variant.

CBA economist Tobin Gorey waxed lyrical this week is saying “Traders’ and investors’ imperative is to be on the edge of the information envelope. But for now the information is so flimsy, and the subject of such whimsy, that it all seems a bit mimsy.”

There was nothing “flimsy” about the fall in cotton prices, with the March forward price falling from US115c/lb to US104c/lb in the week.

The uncertainty that abounds did put a bit more interest into the wool forward market. Traded volumes were still at a low level but slightly up on the last two weeks. Buyers seem interested to hedge where possible, but lack of volume from the grower side remains a difficulty to ascertain fair value.

Generally, the curve remains relatively flat across all microns. Highlight was solid volume in the 17 micron contract, which traded January at 2380 cents and April at 2400/2405 cents. Bidding remains consistent and hedging opportunities remain for limited volume out to October 2023.

Buyers seem to still hold a preference for the medium qualities over the fine and superfines as they see the basis declining. This was not evident with the forward trades in 17 micron earlier in the week, which went through at a premium to the opening cash level of 2383 cents. This was likely to be a case of the buyer wishing to avoid any basis risk and wanting to hedge the outright position as the priority.

The graph below outlines the magnitude of the movement in the difference better 17 and 21 micron. We expect the same structure into next week, with buyer interest likely to be now focused firmly on 2022. 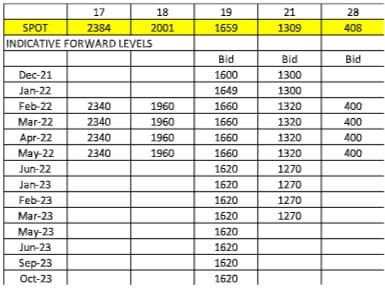