FORWARD wool market trading continued with limited volumes this week, with firm bidding the spot auction market slipped for the second week in a row.

All Merino qualities lost around 10 cents at auctions this week, with 18 micron wool most affected and losing 20 cents.

Trades in the forwards were light, with growers keenest on the finer qualities. The 17 micron contract was executed at 2240 cents for June and November and 17.5 micron traded at 2060 cents for April 2022.

Growers are understandably more comfortable hedging at levels in the higher percentile ranges. This has played out since Christmas, with 75 percent of trades on the forwards being 19.5 microns and finer.

It does call into question why the volumes executed in the 18 and 19 micron contracts have been so limited. Less than 1pc of the underlying volume is currently being hedged.

With 46,000 bales up at auctions next week, we expect forward levels to hold as the spot market continues its steady range trade pattern of the last four months. 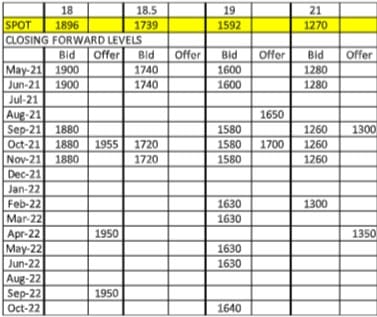