A BRIGHTER than expected opening to the first Australian wool auctions of 2021 replicated itself in the forward markets this week.

But while large volumes of wool changed hands at auction – with more than 46,000 bales sold — volumes remained disappointing on the forward markets.

Buyers, initially buoyed by the steady start to the market, continually paid premiums into the late autumn months. The 18 micron index traded at the start of the week 40 cents over cash at 1635c/kg. Fine wools performed best of all and closed the week dearer in the spot auction, with 18 micron fleece closing in Melbourne at 1627cents, up 57 cents on the week.

The vast majority of forward trades (24 tonnes) occurred in the 19 micron category. They traded from a low of 1400 cents to a high of 1435 cents, before coming off the peak to close on the May forward market at 1425 cents. With cash closing the week at 1390 cents, this represented a 35-45 cent premium. Surprisingly, this failed to bring significant volume to the forward sell side.

The 19 micron chart below indicates that prices have been relatively range bound for the last quarter of 2020 into the New Year. Starting the October quarter at 1150 cents, the 19 micron index peaked at 1450 cents in October and December, before closing the year at 1391 cents. The index closed this week marginally cheaper 1389 cents.

With the current season average running at 1250 cents — within a range of 996-1453 cents — it is a little hard to understand the resistance to hedge toward the top of the range.

With more than 50,000 bales on offer next week, we can expect the market to be tested again. Fine wools are likely to again perform better than the broader quality lines. The spread between 19 micron and 21 micron is out to 218 cents and challenging the three-year high of 225 cents.

We expect bidding on the forwards in general to be a little more muted going into next auction week’s sales, with much riding on the ability to clear the majority of stock on offer. 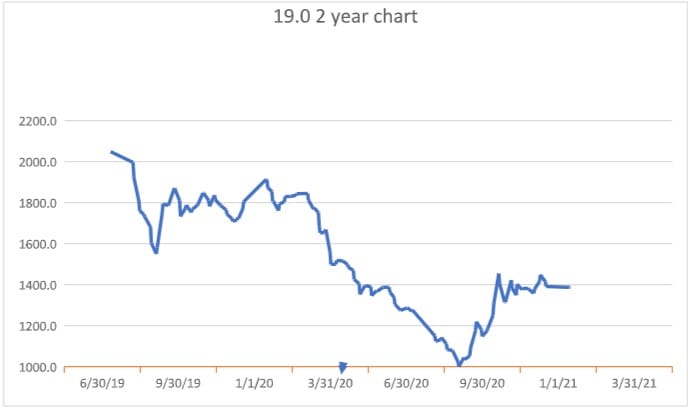