At auction only, 12.5 percent of lots were passed in of the nearly 50,000 bales on offer, indicating most growers were accepting of current levels.

Market sentiment has ebbed and followed. Consensus was that the strong performance of auctions throughout January – when the Eastern Market Indicator rose 132 cents — would be followed by a significant retraction under the weight of a continuing strong dollar and the upcoming Chinese New Year. In reality, the pullback has been minor, with the EMI losing only 16 cents in the last fortnight. The 20 micron and finer wools have actually appreciated in February, but particularly the medium Merinos and crossbreds have lost ground.

Where the market goes from here is up for debate. Latest export signals are a little mixed with some better signs out of Italy and the subcontinent augmenting China’s dominant 87pc market share.

Bidding on the forwards remains positive on the 19 and 21 micron contracts. The balance of the season (Feb to June) is bid flat to cash. From December 2021 and out to June 2022 the forwards are bid at a slight premium — 19 micron plus 10 cents and 21 micron plus 40 cents. The fact that only 12.5 tonnes traded forward, roughly 0.2pc of the weekly offering, seems to run contrary to the high auction clearance rate.

Finer wools are bid at a discount forward, but this is probably more to do with where buyers see the relative value and risk rather than absolute market direction. This is illustrated in the attached basis charts. Basis charts show the difference between micron prices over time. At this point in time the premiums for finer microns are above the 12-year averages.

Next week will see another 49,000 bales on offer. Hopefully the market will show similar resolve to the close this week and forward bids will remain solid and growers can avail themselves of hedging opportunities out to mid-2022. 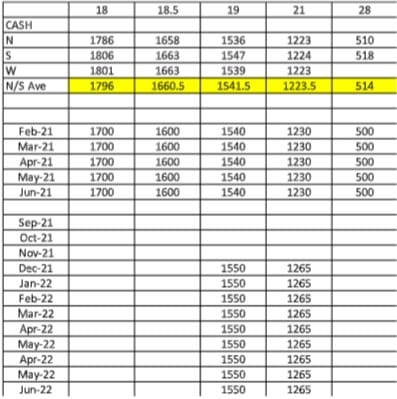 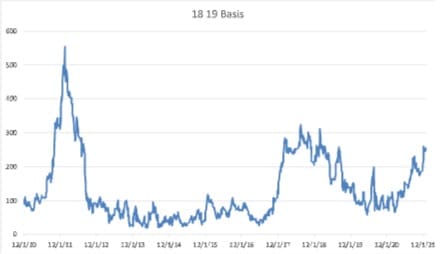 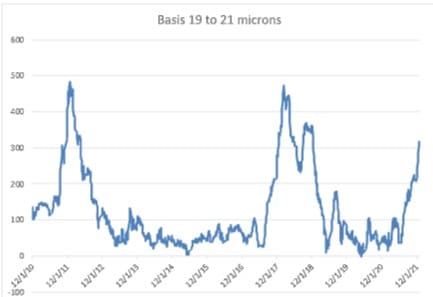