Offshore demand again disappointed, leading to a continued fall in the spot auction market, which lost around 3 percent for the week.

On the forward markets, it was again a case of “first in best dressed”. The majority of trades occurred early in the week, with a small number of growers taking advantage of the cash bids at market out to May 2022. Nine separate maturity months traded from August to May. The 19 micron and 21 micron contracts shared most of the volume, with one lot trading in August for 18 micron.

The outlook for next week is that we will likely see a pullback in the forward market. It will likely present some opportunities around the new spot levels as buyers look to get some cover in what looks to be a reasonably volatile period for the next two to three months.

Where buyers and sellers see fair value is difficult to estimate. Lower auction volumes next week might see short term support and give exporters the confidence to lock in levels around this week close (19 micron at 1655 cents and 21 micron at 1255 cents). If the last months trading is any indication New Year levels may justify a slight premium although not evident just now. 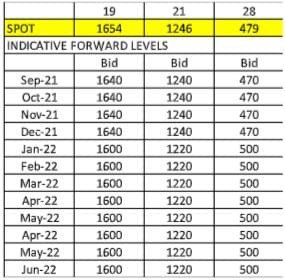