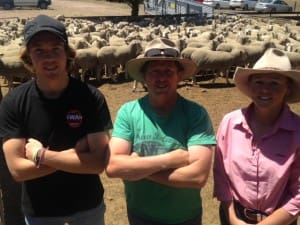 First cross ewes offered for the first time at the Salt Creek reduction sale sold for $214 at Woorndoo yesterday.

Mr Bruty said he had expected the ewes to make $180-$185, but paid the price to Elders auctioneer Graeme Nicholson for the OJD-vaccinated ewes because of their quality. He said Wayne was coming home to the farm and would share the workload with the added ewes.

“I haven’t seen ewes that well-presented before, my agent said the same and so did the truck driver.

The Brutys averaged $105 for his prime lambs this year and also sold 500 two and three-year-old Merino wethers to help pay for the first cross ewes. The ewes will be joined to White Suffolk rams in the next three weeks.

Salt Creek owner Peter Coy said the first cross ewes were only offered in the annual sale because of the retirement of his mate and well-known stockman Keith Urquhart, who had been buying them privately for several years.

“This is our 31st sale and it is the first time we’ve had first cross ewes in the sale.”

Salt Creek also offered one-year-old Merino ewes in the sale for the first time, due to a good lambing in 2013 and the need to cut numbers because of the season. The first 401 of the September 2013-drop June shorn Merino ewes sold to Jamecca Plains of Caramut, through Elders Mortlake. They also paid $107 for another 264 2013-drop ewes and $100 for 429 September 2012-drop May shorn ewes. 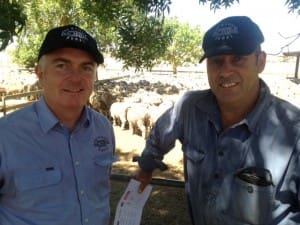 Cavendish producer Rob Lawrance with Fox and Lillie Rural agent Eamon Timms paid $98 for 263 of the 2013-drop Merino ewes and $79 for another 189, but was also doing a wether-ewe changeover.

“We sold cracker wethers today for $65 off-shears in Hamilton.

“It wasn’t a clean swap but we’ve got more wethers that we’ll be trading and getting back into the ewes.

“We will go through and class these and anything that is not quite schmiko we will join to a White Suffolk and sell it in-lamb and join the rest to a Merino ram.” 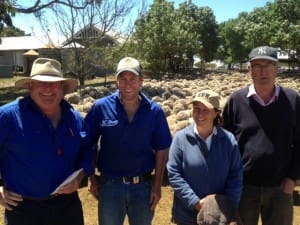 Mr Coy said the whole sale was strong and it was good to see that buyers were still chasing Merinos.

“They are good ewes, but I will be delighted to see the four deckers going out.”

Elders Mortlake manager Hayden Lanyon said the sale exceeded expectations in place, but overall prices were similar to last year. He was expecting around $180 for the first cross ewes.