FIRST cross ewes sold to a record price of $480 and ewes lambs made to $364 at the first AWN sheep sale at Edenhope yesterday.

It was the first sale at Edenhope held by AWN after the agency recruited several agents throughout the Wimmera and western Victoria with the retirement of the former Rodwells businesses from Horsham and Edenhope.

Despite sale organiser and AWN Edenhope manager David Hanel estimating some of the ewes as lighter this year and ewe lambs estimated at 5-8kg lighter, demand was strong from return buyers seeking known lines, pushed by new buyers recognising opportunities in a good Spring.

This year the top price was $54 above the 2020 peak and honours were shared by last year’s holder first cross ewe finishers Mark and Janine Hancock, and the Stewart family’s Wimmera Downs from Greens Creek, north of Stawell. The Hancock’s first line of 189 May/June 2020 drop ewes, bought as ewe lambs at Edenhope last year, sold for $480 to return buyer LMB Linke agent Bernie Grant for clients Ian and Sarah James at Casterton. The Hancock’s second line of 60 lighter ewes made $354, giving them a 2021 average price of just under $450.

Mark Hancock said he wasn’t expecting $480 for his ewes, which were bought out of the sale as McClure lambs last year, but he thought rates dropped away for later lines.

“I think there was a good opportunity for some buyers there to get some reasonably buying sheep at the current market.”

Many lines in the sale, and especially the ewe lambs, showed the signs of a tough start to the season.

“It was a late start, no feed through the winter,” he said.

Mr Hancock said he always buys in ewe lambs at Edenhope on the day he sells. In previous years he has bought the “seconds or thirds” ewe lamb drafts, but this year with strong prime lamb and mutton prices, he was happy to pay $290 for the top line of R.T. and B.J. McClure’s ewe lamb offering, 236 lambs estimated to weight about 45kgs liveweight.

Sale organiser AWN Edenhope manager David Hanel said the sale had produced record prices for the two categories in what has been a tough season, with a wet cold winter slowing growth rates, especially in the ewe lambs.

He said the vendors were extremely happy to achieve the prices, despite not many of the ewe lambs of joinable weights without more finishing. But this represented opportunities for southern buyers buying for late Autumn joining.

“We haven’t seen anything much of an opportunity on AuctionsPlus yet for the quality of the sheep and the prices that they are making.

“We buy the sheep annually here and we only bought sheep that we’ve bought before because we know the sheep,” he said.

“With the power of feed that we have at home, at Heywood, we know we can get them big enough to join them.

“They are extremely small compared to last year, a lot smaller,” he said.

The agency bought about 1800 ewe lambs from known breeders and Mr Hutchison said the ewe lambs would be joined late February-March. 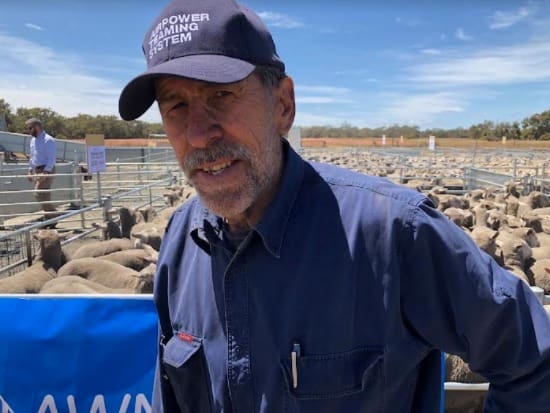