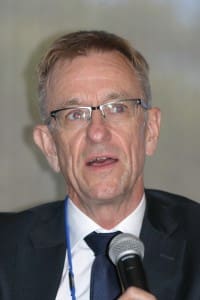 A Federal Government claim of 98 percent compliance under the Exporter Supply Chain Assurance Scheme for the live export industry came under fire from the RSPCA at the Livex Forum 2014 in Melbourne last week.

In his address at the forum, Department of Agriculture deputy secretary Phillip Glyde said ESCAS was working, ahead of the release of a government report on the system.

He also outlined the government’s conditional approval of a shift to “light touch” co-regulation built around an industry quality assurance scheme.

Mr Glyde said the live export industry was vital to the future of large parts of Australia, enhanced food security around the world, and was highly valued by trading partners as a reliable, supplier of quality livestock, apart from the damage done by the Indonesian market closure in 2011. In 2013-14 Australia exported over 1.1 million head of cattle and nearly 2 million sheep, for a total value of $1.2 billion.

He said ESCAS with a compliance rate of 98 percent, had improved animal welfare and regained community confidence that the industry and the government were able to meet the assurances people were looking for in 2011.

“As of a little while ago, there was 805 establishments in 18 different countries that have been independently audited and found to be compliant with international animal welfare standards.

“That is a huge step forward in terms of animal welfare around the world, put aside the costs for a moment … it is something that the industry has not gained credit for in the broader community.”

RSPCA rejects 98pc claim as “too high to be realistic”

But RSPCA president Heather Neil said the 98pc compliance figure was “a world leader in any assurance scheme” and was too high to be realistic.

Mr Glyde said the 98pc compliance rate represented the number of livestock recorded outside ESCAS “in terms of what we see in terms of the statistics that we have available to us.”

“In any compliance system there are things that you don’t know, things that are happening that aren’t reported and are unseen, and that would contribute to a lower compliance rate than 98 per cent.”

“We are just reporting what we know … no-one really knows, but it is still a significant statistic.”

He said there was no such thing as an absolute measure of compliance and there had been improvement under ESCAS over time.

Ms Neil said the 98pc compliance figure from 805 establishments in 18 countries meant the way that ESCAS leakage was being measured was incorrect.

“That’s near-perfect performance and in the live export industry that is unlikely to be the case, based on public reports and complaints.

“An assurance scheme that is delivering 98pc compliance on a very blunt measure like that is just misleading people that you are doing really well and you don’t need to keep on going,” she said.

Live export industry has a long way to go – RSPCA

Ms Neil was also not sure if the compliance figure included leakage figures reported by animal rights groups. She conceded that ESCAS had made improvements by implementing world animal welfare standards, but it “wasn’t anywhere near close to perfect”.

“I would be very worried that people at this conference, people involved in the live export industry and politicians are going to grab hold of that number and say ‘See we are doing a really good job’.

“The industry is doing better than before, but it was doing pretty poorly before and there is a long way to go.”

“The RSPCA is not comfortable with how the live export industry is still performing – it has a long way to go.

“It has made significant in-roads, but it still isn’t doing the things voluntarily that it really should be – and particularly stunning.”

Ms Neil said the industry did not take opportunities to only supply animals if facilities utilise stunning.

Mr Glyde said a review of ESCAS was almost finished and was doing the rounds of consultation before being released. He said submissions to that review indicated the system was working well and had improved animal welfare outcomes, infrastructure and training in markets. But he said reforms were needed to ensure the trade could be sustainable for the long-term.

Under ESCAS the number of animals outside Eid festival supply chains had decreased sharply, exporters were self-reporting leakage issues promptly and “most of the time those exporters are beating the reports that we get from animal welfare lobby organisations”, Mr Glyde said.

“Our view is that the significant improvement in performance around Eid is a really significant indicator of a system that is working.”

But Mr Glyde said the ESCAS system was costly to government and exporters.

“It is really clear that a whole of things that were put in place make no real significant contribution to improving animal welfare outcomes or reassuring the public that the industry is functioning well.

“It is completely foreign, confusing and annoying to many of our import countries and a lot of foreign governments really resent the fact that it appears as though the Australian Government is attempting to manipulate in their borders – it takes extra-territoriality as a concept to new levels.”

Some markets, including Saudi Arabia, regard ESCAS as an intrusion on their sovereign rights, he said.

An industry quality assurance scheme is the way forward

Mr Glyde said the government and industry were trying to fix the existing regulatory system by moving to risk-based auditing of supply chains, simplifying approval processes and removal of necessity of MOUs for unloading. He said the current ESCAS system made Australia uncompetitive with other countries and the aim was an efficient system that did not penalise Australian exporters in overseas markets.

ESCAS reforms were only one of the steps to “nirvana” — a better way to achieve the same objectives of ESCAS is designed to achieve – involving control of traceability, auditing and meeting international animal welfare standards. The Farmer Review recommended that industry develop a through-chain quality assurance system, he said.

“The government certainly welcomed a proposal by industry to develop an industry assurance scheme and reduce government regulation, ensuring we still have the same standards and achieve the same objectives of ESCAS.

“While the government hasn’t approved that it is certainly looking forward to being able to work with industry to find a better way forward,” Mr Glyde said.

“ESCAS is clunky and inefficient and there is a real need to find a better way through.”

“The quality assurance system that the industry (the Livestock Export Global Assurance Program) is working on, is the way forward,” he said.

“If that system can be developed and people like me can then step back and convince mInisters and Cabinet that the system delivers exactly the same outcomes, if not better outcomes, than our current system, then there is a chance that you are in control of your destiny.”

“You secure your own future and you don’t have people like me on behalf of the government trying to interfere and intervene.”

If the industry fell behind public opinion, it would lead to more regulation, loss of trust, higher compliance costs and potential closure, he said.

“The government was definitely interested in moving back towards an industry quality assurance scheme.”

Mr Glyde said an industry quality assurance program was not self-regulation, as had been suggested by animal welfare activists.

“It’s co-regulation – it is asking industry to find the best way to achieve a particular outcome.”

“If we can get to the situation that we have with almost every other export commodity where there is a light touch government and we leave the field – we still need to regulate and we still have to certify that the product meets a country’s import requirements.”

“We want to be there in a much less overt way and much more efficient way than we currently are.”