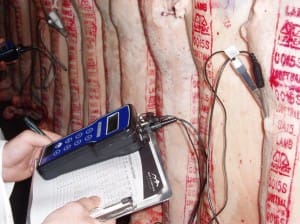 Eastern states lamb slaughter for 2015 – at an average 350,000 head per week — is steady on levels at the same time last year, according to Meat and Livestock Australia’s National Livestock Reporting Service, has been steady on last year.

However, in some weeks kill numbers have pushed closer to 400,000 head, as processors attempt to keep pace with strong export demand, and some drier areas in the south encourage turn-off, MLA said.

“Reports indicate many are booked out at least two to three weeks in advance.”

As lamb slaughter levels maintain their momentum, the national OTH lamb indicators are averaging roughly the same as they were this time last year, MLA said. Light lambs have returned 513¢/kg cwt so far in March, while trade and heavy lambs have both averaged 534¢/kg cwt.

MLA said the average weekly mutton kill for the year-to-date, has declined 24 percent to 137,610 head, following consistently high slaughter throughout 2014.

In line with the tighter numbers and lower slaughter, the OTH mutton indicator has lifted 2opc year-on-year, averaging 308¢/kg cwt in March, albeit off quite a low base.

Coming off the back of a record year for slaughter and production, the eastern states weekly kill is likely to slow over the next few months as supplies tighten, particularly if the forecast for above average rainfall during April and May eventuates, MLA said.