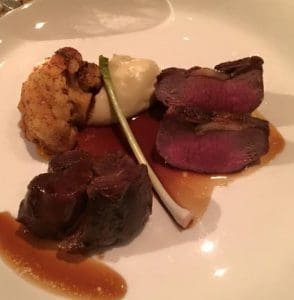 DRY-AGED mutton, hogget and lamb had more flavour than wet-aged lamb and could sell for a 20-30 percent premium, trials funded by Meat & Livestock Australia have found.

And MLA has estimated that dry-aging only 10 percent of Australia’s available mutton supply could conservatively deliver over $3.5 million of new value to the sheep meat industry.

Meat is dry-aged by storage in near-freezing low humidity conditions for several weeks and wet-aging is done by placing fresh meat in vacuum-sealed bags.

Lamb, hogget and mutton, were dry-aged in sides for 39 days at Mr Burvill’s South Australian Cattle Co. dry-aging facility in the Adelaide Hills. The meat was then tasted at the A Hereford beefstouw restaurant in Adelaide by a sensory panel of 19 people, including chefs and food writers.

Mr Burvill’s research found that dry-aging of hogget and mutton could add a significant premium to the traditionally lower value types of sheep meat, “to a point where certain hogget and mutton cuts may be able to be sold for more than wet-aged lamb.”

One trial found that with exception of dry-aged mutton leg, all the dry-aged lamb, hogget and mutton cuts were more liked by a sensory panel than wet-aged lamb.

“This is truly a remarkable finding.

“It appears that dry-ageing of hogget and mutton, in addition to dry-aging lamb, has significant beneficial sensory properties over wet aged lamb,” Mr Burvill said in his report.

Dry-aging of lamb, hogget and mutton was found to have many beneficial flavour impacts, most notably in tenderness, roasted and buttery flavour.

Dry-aged lamb was the most liked over all the other types of sheep meat in each of the three cuts tasted — loin, leg and forequarter. The dry-aged hogget was the second most liked treatment in the trial, followed by the dry-aged mutton, and the least liked overall was the wet-aged lamb.

“Interestingly, the most liked cut of the whole trial was the dry aged forequarter.”

The well-documented increase in tenderness effect of dry-aging in beef, certainly appears to be the case in all classes of sheep meat, Mr Burvill said.

Potential for more sheep meat on menus and consumer plates 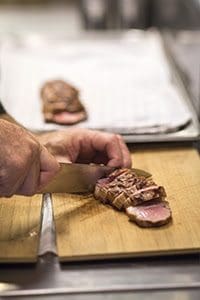 “Mutton and hogget typically attracts a lower price than lamb due to age, fat content, flavour and eating quality.

“Currently, wholesale lamb sides are usually sold for roughly $9/kg whereas mutton is sold at about $6.20/kg,” Mr Starling said.

“We believe dry aged sheep meat products could sell for a price premium of between 20-30 per cent over wet aged lamb, achieving an average price of $7.50 to $8/kg, based on the significant positive characteristics dry ageing imparts on the flavour of the meat.

“This project showcased improvements and desirable taste and presentation for dry aged sheep meat that were very similar to dry aged beef, by creating a different supply chain,” he said.

Mr Starling said the trial was driven by the sheep meat industry identifying the need for greater value-adding and new products for sheep meat.

“Industry asked us to look at what we could do to increase lamb’s presence on dinner plates.

“We took an approach from beef and applied it to lamb, initially targeting lambs that fall outside of premium grid points.”

“In the red meat industry, this consumer demand has translated into many processors, butchers and restaurants experimenting in the production of dry-aged beef.

“This trial has demonstrated there’s a place for dry-aged sheep meat.”

Mr Burvill’s trials found that lamb, hogget and mutton dry-ages in a very similar way to beef, although the weight losses as a percentage of the starting weight are about 5pc higher than beef. This is due to the higher surface area to volume ratio in lamb over beef.

The plateable yield of dry-aged lamb, hogget and mutton were on average 16.5pc lower than for wet-aged lamb, he said. 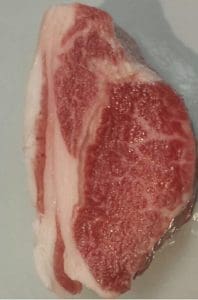 Highly marbled dry-aged Moojepin Merino mutton from a 10-year-old ewe sold for $320 to the Print Hall Restaurant in Perth, WA.

Mr Thompson, with his wife Susan and son Hamish have been marketing dry-aged mutton from mostly 5-8 year-old Merino ewes to Perth restaurants since April last year. They were now supplying 6-8 carcases a week, although interest after the ABC Landline story on Sunday has boosted this week’s kill to 10.

After numerous knock-backs from processors, David Thompson said the development of dry-aged mutton depended on producers being proactive. He had big plans to lift demand, including to interstate restaurants. The only obstacle to his program had been opposition by some processors.

“They just said you can’t do it, but we’ve taken it to the top end chefs in Perth and they’ve said we really like the product and we want more.

“We’ve gone through three processors to make sure we can do it.”

Mr Thompson said he would not have been able to develop a dry-aged mutton market without selecting for high fat cover to minimise carcase yield loss.

“If you haven’t got that genetic fat, you just can’t do it.

“We’ve got to get away, from shanks, cutlets and racks – there are so many other things that we can cook.”

To view the final report and results of the trials, please click here.