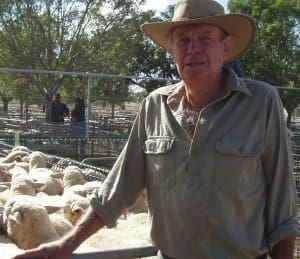 There was consistent demand from domestic trade and restocker buyers, with some exporters making selective purchases at most centres.

The National Livestock Reporting Service quoted all lamb and mutton indicators as firm or increasing.

Nationally, the trade lamb indicator was up 2 cents to 538c/kg and the heavy lamb indice closed firm at 541c/kg. The national mutton indicator increased 7 cents to 361c/kg.

The NLRS said the mixed quality yarding had some good heavy and trade weight lambs and a fair percentage of light weights. All the regular buyers operated.

It was a mainly good quality yarding of mutton. Merino sheep were firm while the crossbred ewes were $5 dearer. The better 3 and 4 score ewes sold from $76-$105 for Merinos and $112 for crossbreds. The 3 and 4 score Merino wethers sold from $70-$121.

The NLRS said quality was a little mixed throughout, with some better finished lambs. Most were trade weights, with a few heavy lambs. Young lamb numbers declined compared to the previous sale. There was a handy supply of Dorpers and the odd pen of store lambs. All the buyers operated and demand was steady, resulting in a firm market.

Light lambs to the processors averaged $87.70. Medium and heavy trade weight lambs were firm to a couple dearer in places and averaged from 485c/kg-500c/kg cwt. The quality trade weights sold from $108-$115.

The NLRS said quality was very good in all weights and grades. Trade lambs were in reasonable supply, with more recently shorn lambs. Heavy and extra lambs were well-supplied. There were fewer secondary lambs lacking finish, which lifted prices significantly. The usual contingent of domestic and export buyers competed in a solid market.

There were limited numbers of trade Merino lambs and bidding intensified for the well-finished pens, resulting in a dearer trend of up to $11. Medium and heavy Merino trade lambs made $109-$122. Well-bred secondary lambs returning to the paddock were in limited numbers and sold from $86-$112, while lambs to feed on reached a top price of $120.

Mutton quality was quite mixed, with all weights and grades represented. Merino ewes suitable for the trade were well-supplied and prices were unchanged to $2 higher, to average 333¢/kg-375c/kg cwt. Heavy ewes sold to strong demand, with several buyers eager to secure adequate supplies. Heavy sheep sold $4 dearer, making from $86-$132.20. Merino wethers were in limited numbers and processors paid from $79-$126.

In Victoria at Hamilton on Wednesday, the agents yarded 14,196 lambs, 4611 more than last week.

The regular buyers were present, although some were not always operating, but bidding remained consistent, especially on the best conditioned 3 and 4 scores heavier trade weight lambs. These lines were firm to $3 dearer at times, from 530 to 560c/kg cwt. Light weight 1 and 2 scores sold from $60-$105. Trade weight 2 and 3 score lambs sold from $104-$129. The 22kg cwt plus 3 and 4 score lambs sold from $130, to a top of $155 for lambs with an estimated carcase weight of 28kg.

The NLRS said lamb quality was average, with reasonable numbers of trade weight and heavy lambs penned. Competition from most of the usual buyers was strong for the better presented lambs, with most selling to a dearer trend to be $5-$10 up on last week.

Restocking activity was limited to a few pens of joined Merino ewes, that sold from $109.50-$121.50, and to crossbred ewes, which made to $130.50. The sheep offering included some good runs of heavy Merino and crossbred sheep in near full wool.

In the Hamilton saleyards on Thursday, the agents yarded 9696 sheep, 1191 more than last week.

The NLRS said the yarding had some good quality sheep down to some very light weights. About one third were Merino wethers. ‘

The regular buyers were all present and, while some did not operate, others showed more urgency to fill orders across all mutton grades. This ensured a dearer market, with light sheep $4-$5 better, medium weights $6-$8 dearer and the heavier sheep gained $10-$12. There was very little activity from restockers this week.

Prices for heavy and trade weight lambs remained firm to $5 dearer than at the last sale, with some crossbred lambs selling for top price of $177. A quality pen of Merino lambs sold to tops of $142.20.

The NLRS said the usual trade and processor buyers were present, as well as restockers. Prices improved across all lamb categories.

The NLRS said hot and dry conditions continue to impact on water and feed. There were more ewes, along with solid supplies of crossbred and Merino lambs.

Quality lifted, with more pens of prime lambs and moderate numbers of heavy ewes. Light conditioned and light weight lambs were plentiful, with large supplies of very light weight Merino lambs available. Most buyers were present but some lamb buyers did not operate due to quality.

Live export orders were limited. Prices for the pens of prime trade weight lambs eased by $5. Light and store lambs also eased. Very light store lambs less than 14kg cwt, most of which were Merino drafts, made $10-$72, back more than $5. Light lambs weighing less than 18kg cwt to processors, feeders and restockers made from $65-$81.50 to also be easier.

The better 3 and 4 score ewes, including heavy weight drafts, made from $63-$74 to be $5 easier. Restockers were active on light conditioned and longer wool drafts at firm prices. Wether prices eased on quality and selective live export demand. Export weight wethers made $74-$93 to be firm, as were the store wethers which sold from $45-$82.