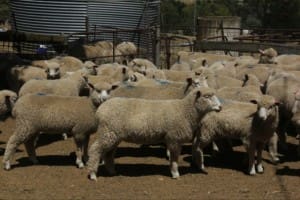 These four-month-old 11.3kg cwt Poll Dorset cross lambs sold for $85 at Yass on AuctionsPlus this week.

This contrasted at some centres in Victoria where there was less competition from the export processors with enough lambs already booked over the hooks or winding down for the end of the year.

Exporters have also been faced with insufficient weight or quality in many of the saleyard offerings and processors generally have found lower meat yields in lambs are pushing up the dressed weight costs of their lambs.

This has meant that lambs bought in the saleyards recently for 570c/kg-580c/kg cwt on a physical assessment have come out at around 600c/kg dressed on the abattoir rail.

At Hamilton on Wednesday agents reported that exporters did not buy lambs from a yarding where about half the lines offered were light score 1 and 2 lambs.

Nevertheless domestic processors paid around or better than 600c/kg cwt for the best heavy trade and export weight lambs at Hamilton and Wagga.

After Thursday’s sales, the National Livestock Reporting Service quoted the Eastern States Daily Trade Lamb Indicator up one cent overnight to 546c/kg cwt, after a weekly lift of 30 cents. The ESD heavy lamb indice was at 552c/kg, up two cents overnight, but 25 cents better over the previous seven days. The ESS light lamb indicator closed up one cent to 533c/kg, up 45 cents for the week. The ESD restocker lamb indicator sell three cents to 530c/kg and the Merino lamb indice dropped four cents to 476c/kg. The ESD mutton indicator closed on Thursday at 325c/kg, up two cents.

The national trade lamb indicator closed at 545c/kg cwt on Thursday, the heavy lamb indice was at 551c/kg and mutton was at 323c/kg.

The NLRS said there were some good runs of heavy and trade weight new season lambs along with a good number of store lambs. The market was solid.

Most Goulburn lambs firm to $10 dearer

The NLRS said lamb quality was mixed, with many of the new season lambs lacking quality, though there were a few more shorn lots showing good condition. Mainly light and medium weights were offered with heavy lambs scarce. Dorpers and Merinos were also present in small numbers.

One recent processor order did not operate, but demand remained strong, with most descriptions firm to $10 dearer.

Restocker orders were fewer, but competition was solid for suitable lots and those lambs less than 18kg cwt and returning to the paddock made from $99-$107. Light processing lots, 16-18kg cwt, ranged from $96-$105 to average around $10 dearer. Trade weight new season lambs, including a fair percentage of freshly shorn lots, made from $99-$116, while a few heavy weights reached $126. Most of the slaughter lambs averaged 500c/kg-565c/kg cwt.

The plainer quality mutton run was mainly light and medium weight ewes. Prices fluctuated with quality but the trend was cheaper. Light 2 score ewes made $31-$55, with medium and heavy weights from $50-$90. Very heavy crossbred wethers reached $118 for most of the well-covered sheep to average 280c/kg-350c/kg cwt.

Trade lambs were in reasonable supply with good numbers of young supplementary-fed shorn lambs. Well-shaped trade lambs were keenly sought by all processors, which helped push prices higher. The usual contingent of domestic and export buyers were competing in a dearer market. Secondary lambs suitable to restock or feed were in shorter supply, selling to mixed price trends Bidding was strongest for well-finished heavy shorn trade lambs, which were aided by stronger demand from both export and domestic buyers. The bulk of the heavier trade lambs averaged 593c/kg cwt topping at $148.20. Longer wool trade lambs made from $110-$141 to average 563c/kg cwt.

Trade lambs 18-20kg were the only category to show a cheaper trend easing $3/head. Most of the better lighter trade lambs averaged $115.70. Light plainer lambs sold to varying price trends with some export processors not participating. The plainer conditioned lambs returning to the paddock made from $63-$75.60. Well-bred secondary lambs returning to restock averaged $85.80, while lambs to feed on topped at $122.

Mutton quality was mixed, with all weights and grades represented. Merino ewes suitable for the trade were in reasonable supply, and prices were $10 lower to average 285c/kg-314c/kg cwt. Light sheep were in greater numbers and not all buyers operated which resulted in a cheaper trend of up to $18.

Heavy sheep were in reasonable supply and prices were generally $7-$10 cheaper averaging 290c/kg-315c/kg cwt. Restockers were operating on lines of well bed ewes and buyers paid from $112-$115.

In Victoria at the Hamilton saleyards on Wednesday, the agents yarded 36,403 lambs, 13,290 fewer than last week’s mid-week sale.

The NLRS said there was a good quality yarding of lambs in all weight ranges at Hamilton’s final lamb sale for the year at Hamilton, although yield and dressing percentage is starting to decline. Lighter lambs were offered to a full field of restocker and processor buyers.

Spirited bidding created a very strong sale with prices lifting in all categories, as the price reached 600c/kg cwt at times, however prices eased towards the end of the sale. About half the yarding was light 1 and 2 scores lambs and restockers came from the north central Victoria, the Wimmera, SA’s border and mid-south east areas, Bendigo, Shepparton and local districts. Store buyers were more selective today with stronger competition on the 2 score lambs and less interest in the very light 1 score lambs, which at times were a bit harder to sell. This would have brought back the prices to be around the same levels as last week for the store section.

Heavy lambs to $172 at Horsham

The NLRS said lamb quality was good, with more shorn lambs offered and an outstanding pen of extra heavy shorn lambs that to a market top of $172. The usual buying group plus some extra competition was present and operated keenly in a generally dearer market. Restocking activity was limited with a few pens of lambs selling from $55-$86 and Merino wethers making from $57-$70. Light weight 1 and 2 score lambs sold from $69-$96. Light trade 2 and 3 score lambs sold from $96-$120. Trade weight 3 and 4 score lambs sold from $114-$136, and they ranged from 490c/kg-560c/kg cwt to average around 525c/kg cwt.

The smaller sheep yarding included some good runs of both Merino and crossbreds. Sheep generally sold a few dollars better to be firm to $5 up on last week.

At the Hamilton saleyards on Thursday, the agents yarded 7453 sheep, 16032 fewer than last week.

The NLRS said the regular meat processors attended, but restocker activity was minimal. Quality overall was mixed, with half the yarding made up of crossbred ewes and about a quarter Merino ewes, with fewer merino wethers, of all condition and weight ranges, than previous weeks. Competition was not as strong on the heavier mutton and the best 4 score ewes were $2-$4 cheaper. The wethers were more affected and eased $5-$7, whereas the medium lines were firm to $1 dearer. Light sheep lifted $3-$4.

The NLRS said a smaller field of buyers attended the last market of the year, along with a number of restockers looking for lambs to turn out. Returns for light lambs again rose significantly, while trade weight and heavy lambs were firm on last week’s improved rates.

Light lambs to the trade ranged from $63-$107, with processors generally outbidding restockers. The few restocker purchases ranged from $59-$90. These light lambs consistently sold for well over 600c/kg cwt and were on average $10 dearer. Light weight trade 2 and 3 score lambs ranged from $96-$118, also $10 dearer.

The NLRS said lamb quality was more mixed for the final sale of the year. Agents yarded some good trade and heavy weight drafts along with reasonable numbers of light lambs suitable for processor, feeder and live export orders.

Light store lambs for restockers were limited and of mixed quality. Competition was more selective with good lambs firm, while most lighter drafts sold $4 easier.

Ewe quality was also variable with more light weight and light conditioned ewes and moderate supplies suitable for processors. Ewe prices eased with quality back on recent sales. Very light ewes made $20-$59, to be $5 easier, while 2 score mutton to processors made $39-$72.50, back $4. Better quality 3 and 4 score ewes ranged from $62-$85, back close to $4 on average, with most around 270c/kg cwt. Restockers paid $30-$79, slightly easier than last week.

Wether prices were also slightly lower but quality was mixed. Light and store wethers made $30-$79, with better wethers including export weight drafts from $78-$90 and close to firm. Ram prices remained firm, with ram lambs making to $72.50. Young rams to live export orders and feeders made $15-$56, while old rams to processors made $5-$40.