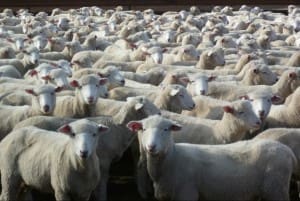 However, mutton prices lost some ground in some saleyards with the absence of major processor Fletcher International  and other processors also winding down sheep kill requirements.

The ESDI for mutton is firm on 364c/kg and the national indice is up one cent to 363c/kg.

The NLRS said most weights and grades were represented with some good trade and heavy weight lambs and good numbers of lightweights suited to restockers. The market was strong compared to the previous week’s cheaper sale.

At the Cootamundra saleyards on Wednesday, the agents yarded 4500 lambs, 100 more than last week, and 2400 sheep.

The NLRS said lamb quality was not as good, with more lighter store lambs. There were fewer trade and heavy weight lambs, but most were in good condition and there was a very good run of extra heavy weights. Most of the usual buyers competed in a dearer market.

Light trade weight lambs were limited and the better finished lambs averaged $125.60. Medium and heavy trade lambs were in reasonable supply and select butcher orders and stronger demand from major domestic buyers lifted prices by $10. The better-finished medium and heavy trade lambs made from $140-$150 to average 600c/kg cwt. There were fewer Merino lambs and well-finished pens suitable for the trade made from $108-$142.60. Plainer light weight lambs to the processors were keenly sought and prices were $2-$5 higher.

Mutton quality was mixed, with most sheep once again medium weights. Merino ewes suitable for the trade were well-supplied and competition was stronger, resulting in a dearer trend of $6. Trade sheep made from $72-$104. There were fewer heavy sheep and these sold from $96-$128 to average 380-402c/kg cwt.

The NLRS said the usual buyers bid on a mixed quality lamb yarding, not of the standard of previous weeks. Many good lines of medium trade weight lambs were yarded, which sold at improved prices. The higher percentage of unfinished secondary lambs attracted less interest from restockers and only a few Hamilton agents operated.

The NLRS said lamb quality was again good, with several pens of well-presented heavy lambs which sold to $191. The usual buyers operated in a mostly firm lamb market, with the better trade weight and heavy lambs a few dollars up on last week.

The NLRS said competition was solid for the good quality yarding from a full field of buyers and prices were firm on last week.