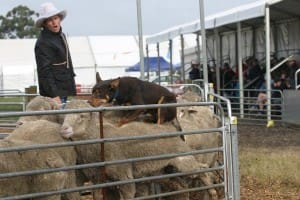 Fred Rains and Minky in action at the 2015 Hamilton Sheepvention.

It was only Minky’s second trial with his very experienced handler – the current NSW yard dog titleholder, with his dog Inman.

Fred said Minky was only just starting to be trained and he put more effort into him prior to the Hamilton trial.

“So it is good that the training worked,” he said.

“Those 5.30am mornings paid,” his wife Catherine said.

Fred will contest the open and championship events at Sheepvention today and tomorrow, but said they aren’t the only reasons he was back in the city. The Hamilton event was a good trial, but he also met his wife Catherine there, “so we wanted to come back.”

“I’ve done this trial a number of times — it’s just a good trial.”

The couple have been married since April this year. Catherine said Fred once lived in Naracoorte and she lived in Melbourne.

“I came up here to get a dog, bought a couple of dogs off Fred, then got a husband.

“I got dogs first and then a husband – priorities,” she said, laughing. 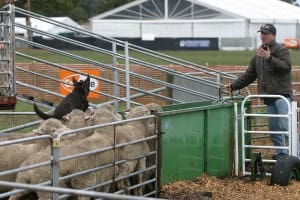 The 17-month-old Minky – named after he got mange as a pup – won the event with two consistent runs of 88 and 89 points to be eight points clear of Strathkellar handler Ian O’Connell’s Cassie. South Australian Jason Crockford’s dog Eulooka Belle was third with 165 points. Ian O’Connell’s Annie placed fourth with 159 points and Darren Holmberg with Go Getta Princess was fourth on 155 points.

“The dog covered and held well, had good stock sense and had power when required.”