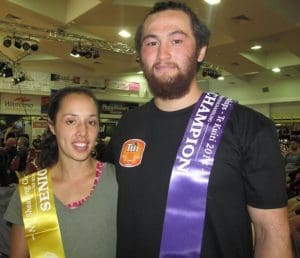 Ricci and his wife, Angela, a fellow 26-year-old former junior champion, started the day equal on points at the top of the rankings after each making more than 10 senior finals during the season.

A rankings and championships showdown emerged when each made their way through the heats on Thursday to qualify in the top five for the final, which was won by first-season Senior woolhandler Ricci Stevens, giving him the point to also claim gthe top ranking.

The runner-up in the final was the nearest other rankings challenger Ash Boyce, of Dannevirke, and Angela Stevens was third in what was her last senior event, after two seasons in the grade and heading for the open class next season. Golden Shears senior final winner Sharon Tuhakaraina, of Gore, was fourth.

The triumph by the man about the Stevens’ house, as the couple’s near two-year-old son Carter nestled in a pushchair nearby, was true to latest form. While Angela Stevens had the better placings in the two finals in which the couple had come up against each other before Christmas, his win made it six-out-of-six in their rivalry in the new year.

Ricci Stevens put the form reversal down to his wife’s break from the wool sheds in the last few months.

“I carried on working,” he said.

But this work wasn’t so much as a wool handler, for he holds a 2015 national shearing title and his training for the wool handling competitions was limited to the end of the run or the day, in the family shearing gang run by his parents-in-law, world champion shearer John Kirkpatrick and wife Raylene.

“I sometimes help the presser out,” said Riccie Stevens, adding he only started competing in wool handling events because it helped pass the time of day while he waited for shearing events later in the day. He is entered in the New Zealand championships’ senior shearing heats.

Angela Stevens said she has shorn a sheep or two, but hasn’t competed in shearing events.

“I’d love to,” she said, pondering maybe a bit of preparation before the novice shearing at next year’s Golden Shears.

Meanwhile, Manawatu competitor Ngaira Puha completed a Golden Shears and New Zealand junior wool handling finals double on Thursday, beating his partner Whakapunaki (Naki) Maraki in the final on Thursday . Second and third respectively were sisters Samantha Baxter and Summer Pritchard, of Pongaroa, in Northern Wairarapa, and fourth, from Flaxmere, was Maraki, who is also mainly a shearer.

Results from the opening day of the 34th New Zealand Shearing and Woolhandling Championships being held in Te Kuiti from April 5-7, 2018: