DIESEL fuel prices have continued to ease over the past month, despite the political and military turmoil being seen in the major oil producing region of the Middle East.

Prices for diesel in rural and regional areas of Australia averaged 160.5c/litre earlier this week, the Australian Institute of Petroleum’s weekly report shows, easing about 3c/l since March.

The easing trend follows three months of stubbornly high diesel prices at or around 164c/litre at the start of the year.

The International Energy Agency’s Oil Market Report said oil futures surged in mid-June by $5/barrel to a nine-month high, as Islamist forces gained ground in Iraq. But the trend was reversed later in the month and into July as a result of growing confidence that Baghdad’s rich southern oil fields would remain untouched by the conflict, plus improved prospects for a recovery in Libyan oil exports.

Australia is only about 40 percent self-sufficient in transport fuels, meaning international market trends have a direct impact on local pricing.

As the graph published here shows, prices have eased further during early July. The latest weekly survey conducted by the Australian Institute of Petroleum shows a national average price for regional and rural areas of Australia at 160.5c/litre. While it’s 3.5c/l down on the mid-March high, it’s still 12c/litre above the recent low-point in the cycle of 148c/l recorded back in May last year.

Based on this week’s AIP diesel price for regional/rural areas of Australia, filling a Toyota Landcruiser 200 series (138 litres, main and auxiliary tanks) today would cost $17 more than the same fill back in mid-May last year.

Biggest declines in price this month have been seen in Queensland, Victoria and South Australia. The Northern Territory bucked the trend, rising 0.1c/l. 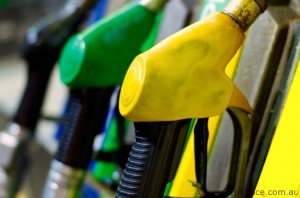 The prices are calculated as a weighted average of retail diesel fuel for country regions in each state/territory. All values include GST.

Variation in fuel prices can have a considerable impact of cost of production across the Australian beef industry, impacting on livestock transport, cost of shipping in live cattle and boxed beef exports, pumping stock water and providing station electricity in remote locations.

Crude oil, diesel and petrol prices are closely linked, as the price of crude oil accounts for the majority of the cost of producing a litre of petrol or diesel. Crude oil is purchased in US$, meaning that changes in the value of the A$ against the US have a direct impact on the relative price of crude oil in A$ terms.