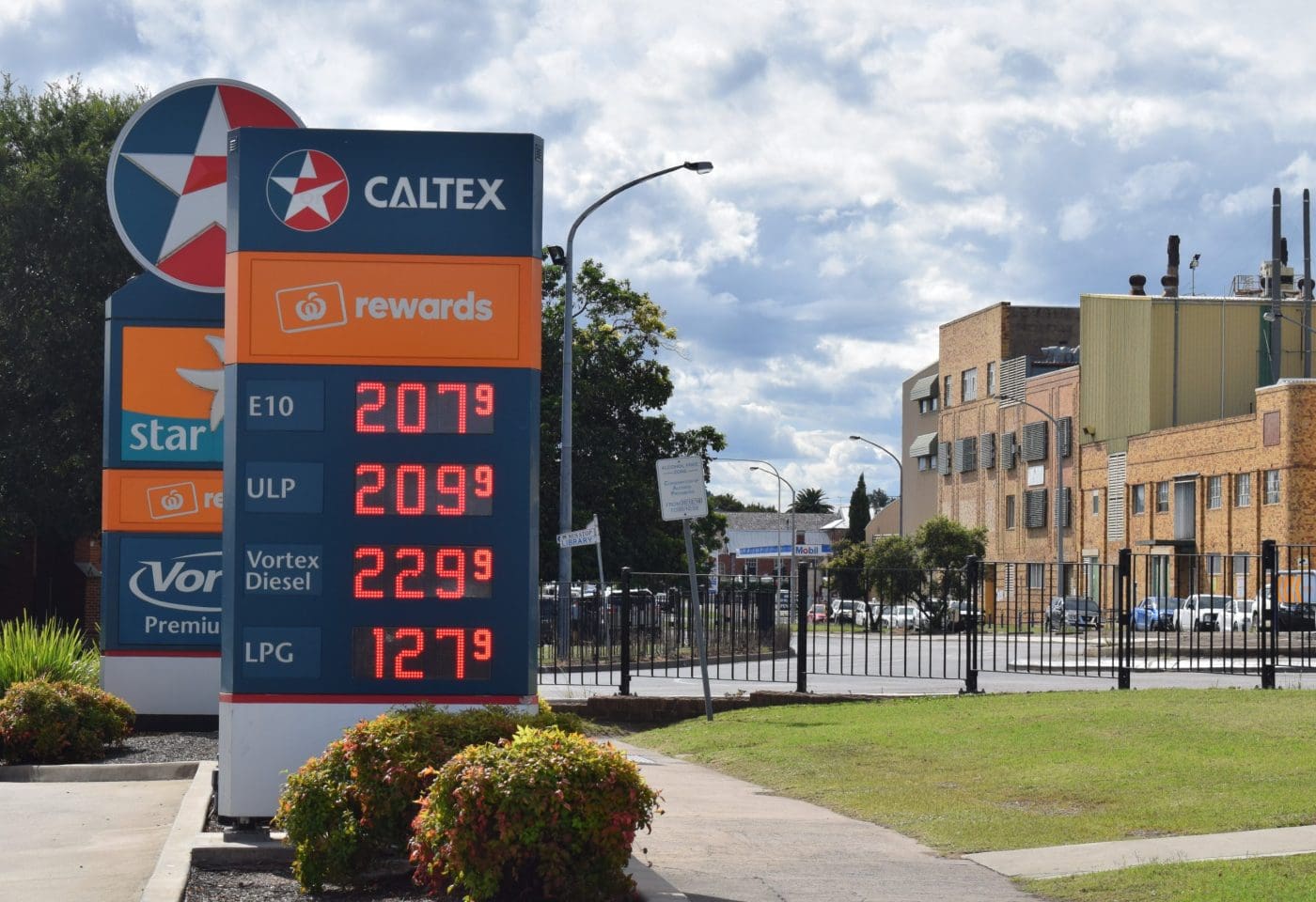 Fuel prices are expected to stay high in the short-term, with oil production ramping up across the world.

CONCERNS about the cost of living in Australia have been switched to high flow this month as petrol and diesel bowsers across the country ticked over the $2/litre mark.

Rising inflation has been an issue for businesses and households for a long time, but the latest burst, spurred on by the Russian invasion of Ukraine, has raised plenty of discussion about its impact on consumer spending.

Russia is the world’s second largest exporter of crude oil and their invasion of Ukraine has significantly impacted global fuel markets. The Federal Government has been under pressure to cut its fuel excise and there’s even been talk of reducing the tax on tap beer.

The Victorian Farmers Federation today called for urgent action from the Federal Government to strengthen Australia’s fuel security in response to global volatility and uncertainty.

Rabobank analyst Angus Gidley-Baird said the ramifications from the Russia/Ukraine situation could contribute to consumer uncertainty. 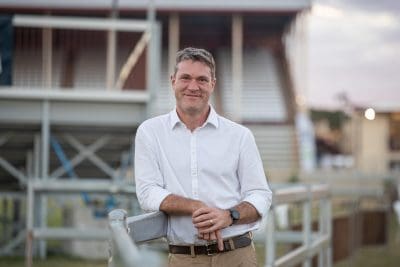 “Australia’s at the top-end of its nominal and real beef price at the moment, the US is in the same predicament and the consumer has partly been the reason for that,” Mr Gidley-Baird said.

“When the cost of living goes up, without a compensatory wage increase to offset it, they’re going to have to take spending from some area and generally the higher priced items are cut from the budget.

“Red meat is fortunate because it has products like mince, which means the product can be consumed at a different price point – but it means you lack the ability to get some additional value out of a carcase.”

Mr Gidley-Baird said it was likely restaurants coming back into the market after COVID uncertainty would have to increase their prices.

“You have retail beef prices elevated at the moment and for food service to come back into the market and build up stocks in its supply chain it will have to compete for the product on a wholesale level,” he said.

Cost of living to remain high

While the Federal Government has been under pressure to use policy to alleviate the cost of living, especially by lowering the fuel excise, general costs are still an issue. 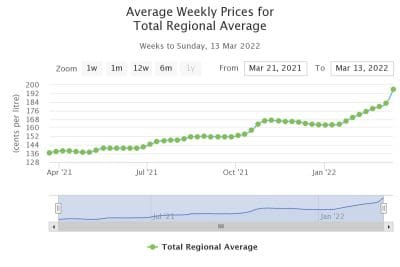 Click to enlarge. Retail petrol and diesel prices have been increasing for most of last year, with a spike this month.

The price of fuel, which is based off the price of oil, was facing upward pressure before the Ukraine war. The International Energy Agency (IEA) put that down to oil producing countries, Russia as well as the Middle East, US and Canada, struggling to ramp production as the world came out of COVID lockdowns.

Countries outside Russia have ramped up production at the start of this year, which is expected to continue in the coming months with new projects and US bringing more online. Despite the tensions in Europe, is forecasting the market to move to a surplus of oil later this year.

In the meantime, the transport industry says it will have to increase trucking prices which could flow on to other factors in the cost of living.

Mr Gidley-Baird said the consumer response was going to be hard to pick.

“COVID effectively changed the rule book on a lot these things,” he said.

“To a certain extent, the consumer has been the reason prices have gone up. But we’re now in a cost push where we’re telling the consumer they are going to have to pay more and I don’t think we have tested that consumer yet.” 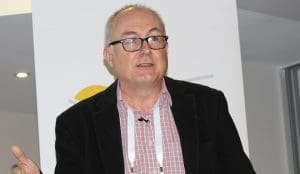 Global AgriTrends analyst Simon Quilty said even with higher food prices and inflation “going through the roof”, there will be a two-speed recovery from the COVID pandemic.

“What’s happened is that those who have money — and it’s really a discussion about the haves and the have nots — are will willing to pay out for high-end meat and for lamb.

“You are seeing it in Wagyu in particular.”

“Current negotiations for the next quarter on Wagyu are already up on the last quarter of last year and the market is willing to accept that,” he said.

“So those that have money are still willing to pay for high-end products, but the problem is the bulk of the middle class is being impacted by inflation.

“So what we are also finding that the demand for ground beef and trims (is increasing), because what the market does is that they ‘dumb down’ on what they want,” he said.

He said those who can’t afford the high-end cuts make up the majority of consumers.

“We are already seeing it in Japan, where there is a strong switch towards more and more trims, and we are seeing it in other economies as well, where desire for ground beef and cheaper protein is starting to come into play.

“So in the global two-speed recovery, this that have money, who are you might say ‘inflation-proof’, are willing to spend the money and therefore we are still seeing strong prices for high-end products like Wagyu and I think that will carry over into lamb as well in certain markets like North America,” Mr Quilty said.

But he said higher fuel prices are only going to exacerbate the inflationary pressures on the majority of consumers who are “feeling the pinch” as part of the low-speed economic recovery.

Mr Quilty expected there will be minimal impact on demand for Australian lamb into the United States, “because it is a high-end product at the moment.”

“But if there is was a major stock market correction and equity markets collapse and were falling, then I think we will start to see the high-speed recovery also run into headwinds.

“So far, we have had nothing like that, but there is also an important footnote that right now at the moment we have not seen any headwinds affecting equity markets, but there is genuine concern about high inflation and the impact on the regular consumer and the low-speed part of the economy,” he said.

He expected at this time that beef and lamb prices were going to hold, and particularly for grain-fed and feeder steers.

“I think lamb will continue to perform well, until we hit some real major financial crisis.” 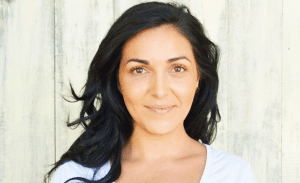 “From sowing crops to transporting it to market, our entire supply chain is reliant on a secure, affordable and disruption-free fuel supply.

“Members of the International Energy Association are obliged to hold 90 days of net fuel import and Australia has been non-compliant since 2012,” she said.

“While Australia does have strategic national reserves, they are stored in the United States and would take over 3 weeks to reach Australia in the event of a crisis.

“Given the global uncertainty in the market, we’re calling for adequate resources to be allocated to the entire supply chain and our strategic fuel reserves to be brought onshore,” Ms Germano said.

“We don’t know what lies ahead, but now is the time to safeguard our industry.

“As producers of perishable essential goods, the security and timeliness of supply are critical. We can’t afford to leave this to chance,” Ms Germano said.

Red meat is ‘most expensive thing that has happened’ – Woolworths 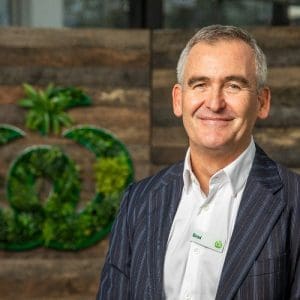 WoolWorths chief executive officer Brad Banducci said in a recent interview that “the most expensive thing that has happened to us is red meat.”

“Both beef and lamb have become incredibly expensive and we all notice that.

“They (have) become almost a bit of a luxury item,” he said.

“That said, pork prices have stopped going up and certainly chicken prices are holding, and it seems as if we might get pink salmon prices.

“So red meat is becoming more expensive, but there are opportunities for families to buy alternative forms of protein that are more affordable.”

Woolworths has recently increased some of its retail prices on red meat and packaged grocery lines following wholesale cost increases from its suppliers, including some soft drinks and red meat.

A Woolworths Group spokesperson today said the group had adjusted some of its retail prices following wholesale cost increases from our suppliers.

“We understand value is important to our customers and work hard to ensure our prices remain competitive in the market.

“We’ll continue to work with our suppliers to sensitively manage the whole-of-market inflationary pressure on food and groceries.”

The company also supplied a recent operating metrics table that showed a decline in the column ‘change in average prices’ indicating the group was in shelf price deflation in 2021.