Coming back to Corriedales for more lambs and wool 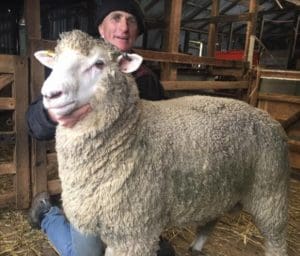 MERINO rams sold for a record average at Hamilton’s Sheepvention ram sale this week, helped along by the Moorundie Poll Merino stud’s top price of $17,000.

But it was the contribution of the Corriedales to the overall average that set a new record for the sale, with Blackwood Performance Corriedales from Evandale, Tasmania, selling a ram for $6500.

Moorundie’s poll ram was bought by Landmark’s Stephen Chalmers for the Leovale stud in Western Australia, helping achieve a record sale average for 248 rams sold of $3260, almost $500 higher than last year. Merino rams sold to $15,000 and averaged $3252, the poll Merino rams averaged $3281 and Gullendah Dohne’s five rams made $3500 each. Elders and Landmark were joint selling agents for the sale.

The Blackwood Performance Corriedale rams at Sheepvention with the $6500 ram on the far right.

Blackwood Performance Corriedales sold their five rams for an average of $2650, driven by rejuvenated stud and commercial demand for the dual purpose sheep. Two rams sold for $2000 each, one made $1750 and another $1000.

Former Merino breeders looking for options to improve the hardiness and fertility of their sheep paid the record Corriedale price and are adding a new aspect to the breed’s comeback on the back of improved lamb returns and fine crossbred wool prices.

Callawadda wool grower Terry Phillips and Australian Wool Network trading manager Andrew Partridge, acting for Wallaloo East breeders Mark and Helen Readings, fought off a challenge from Corriedale stud breeder Tim Hutton to secure the finest ram in Blackwood’s pen of five. The 11 month-old 22.2 micron ram has a tight histogram ram with a standard deviation of 3.5, co-efficient of variation of 15.8, comfort factor of 98.3 and spinning fineness of 20.7 micron.

Terry Phillips said he has been using Corriedales over his 700 Banavie, Wallaloo Park and Greenfields blood Merino ewes for the past three years. He liked the Blackwood ram because his wool was well nourished, white and soft.

He wants to stabilise his flock’s average fibre diameter under 25 micron, ideally 22-23 micron, though it has been difficult to find suitable rams with stable fleece genetics. The Blackwood ram had virtually the same wool on his breech as on the rest of his body, Mr Phillips said.

“He’s not likely to blow out, we reckon,” he said.

“The idea is to go toward the Corriedale, especially if I can get rams like this one.

“I’ll put this bloke over the best of the Merinos and the first crosses (to breed some rams).”

Mr Phillips said the move to Corriedale had helped lift his lamb marking percentage from 80 percent to 100pc and weaner survival had also improved. The Corriedale cross wether lambs are also finishing for sale months earlier, even in tighter years. Mr Phillips shears every six months and the Corriedale infusion is lifting wool cuts. His spring drop Corriedale-Merino cross weaners cut 3kg with seven months growth. Whereas Merino weaners would have about 55mm of wool at this age, the Corriedale-Merino crosses grow about 70mm of 22 micron wool as hoggets.

A place for dual purpose sheep with exception wool 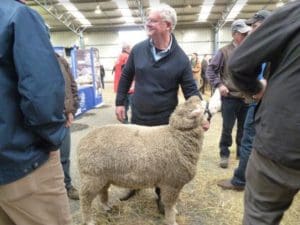 The top-priced Corriedale ram was sired by a ram lamb that topped Peter and Claire Blackwood’s on-property last year. Mr Blackwood said the ram had “really sweet wool” with an exceptional carcase and has been used as a ram lamb. The stud’s previous best price at Sheepvention was $2500.

“Jim Gough said it (the $6500) was a record price for a Corriedale ram at Sheepvention – even going back to the pound days.”

Mr Blackwood said the ram highlights what the stud was trying to do with Corriedales.

“There is a place for that mid-micron dual purpose sheep with exceptional wool.”

Mr Partridge said the Readings had been using Corriedales over Merinos for years, aiming to breed 23-24 micron Merino-type wool on a comeback sheep. He liked the Blackwood ram’s good structure and its 60’s count fleece, with its bold crimp and good pencil staple structure.

Mr Readings said he has been joining his Oakbank blood Merino ewes to Corriedale rams for the past four years and has also added a twist to his crossbreeding program to achieve his fleece diameter objective.

“I joined my first cross Corriedale-Merino ewes back to a Merino this year and I’m pretty impressed with the lambs.

The former shearer “with wool glasses” said he was only interested in breeding comebacks. He is aiming to run about 1200 joinable comeback ewes and 600 cull ewes joined to White Suffolks.

“I want the traits of a Corriedale, the doability of a Corriedale and the well-sprung frame, but I also want a sheep that is going to be around 24-24 microns as an adult.”

His marked 115pc Corriedale-cross lambs from his first maiden Corriedale-Merino cross ewes, using Mooralea Corriedale rams, while he has previously averaged around 80pc from his maiden 1.5 year-old Merino ewes.

Mr Readings used heavy-cutting 23 micron Peppin blood Merino rams from Andrew Arbuckle over his Corriedale-Merino ewes and has been impressed by the lambs.

He believes his comeback breeding program will produce a sheep more able to handle his area’s seasonal conditions on pasture, with minimal use of containment areas to compensate for the increasing early failed springs.

He is hoping the Blackwood ram will help stabilise the flock’s fleece characteristics.

“He is a good upstanding ram.