Minister for Agriculture David Littleproud at the National Press Club of Australia debate.

Under the scheme, the Government, if elected, will guarantee 40 percent of an eligible new farmer’s commercial loan up to a maximum value of $1 million.

Eligible loans will have a maximum term of 10 years, with an option to extend the loan term by two years for applicants who are experiencing significant financial hardship. The maximum Loan to Value Ratio will be capped at 70pc. Applicants must have at least three years of relevant on-farm or equivalent experience.

Minister for Agriculture and Northern Australia David Littleproud said the scheme would assist experienced farmers to address the number one barrier to establishing their own farm business – access to capital.

“Existing landholders are ageing – the average broadacre farmer is 62 years old, with only 10 per cent aged under 47.

“Rising land values and the typical 40 to 60pc equity deposit required by commercial banks without this Government guarantee mean that getting access to a bank loan to start a viable business is very difficult,” he said.

“This support will help families access capital to assist with succession planning, as well as help those families and farmers getting into ownership for the first time.

“This is not a free for all – applicants will need to have on-farm experience, a minimum deposit and be a sound lending prospect from the banks perspective.

“The farmer is still on the hook for their loan,” Mr Littleproud said.

Mr Littleproud said $1.45 million will be provided to the Regional Investment Corporation to administer the program which would open 1 January 2023, if the Coalition is re-elected, and funding for the $75 million guarantee will come from existing RIC appropriations. 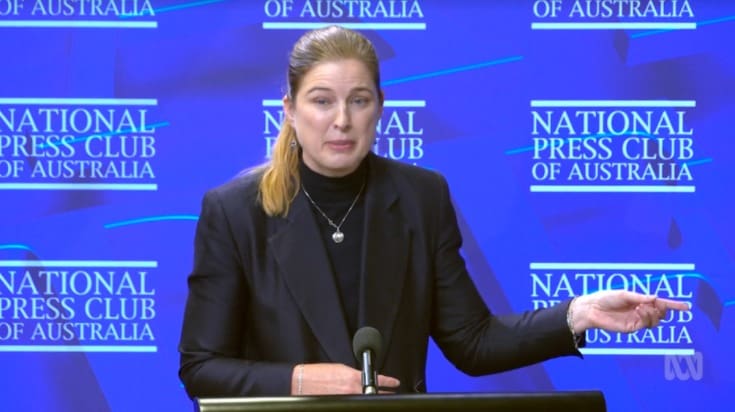 Mr Littleproud announced the proposed initiative during a National Press Club of Australia debate with Labor’s Shadow Minister of Agriculture Julie Collins last week, saying financial institutions had been proactive in ensuring the government put together a mechanism that “has protections, but also creates the opportunity.”

On whether Labor would carry on with the initiative if elected, Ms Collins said the party would need to have a good look at the detail.

“On the surface, my first natural instinct is don’t trust a former banker on some of these things, to be honest, but we will have a look at the detail of it and see.

“But I think that David has got a point that there are a lot of farming families and farming as a family is something that my husband’s family did, so I perfectly understand that this needs to be about supporting those family farms and looking after people, particularly in regional communities, to make sure that they can get a farm,” she said.

“We have got increased prices for land and I think we need to be really careful that what we are not doing is here is replicating some of the other financial services that are already being provided by some of our financial institutions in these areas.”

Scheme would only help investors constrained by equity

Meridian Agriculture director and senior consultant Mike Stephens said given the price of land, $75 million in loans guaranteed appears to be a very token amount.

“The banks may support the scheme as it might lower the risk profile slightly or it may just mean they can offer a lower interest rate than would have otherwise been the case.

“Banks want to be seen to support young farmers,” he said.

“The question is: what is the major constraint to this group?

“Is it equity or is it cash flow with the ability to repay being the constraint?” Mr Stephens said.

“The scheme will only help the equity constraint group.”

Mr Stephens said a further consideration is that the area of Australian land is finite or reducing.

“As with any scheme which interferes with a finite market there will be winners and losers.

“The winners will  be those who qualify and those who sell land because when there are more buyers in the market and or the buyers have more to spend they will put upward pressure on the market price,” he said.

“The loser’s will be those who don’t qualify and the taxpayer.

“Some of the financial burden of enabling landownership in the future generation of farmers will be transferred from farming families to the taxpayer,” Mr Stephens said.

Rural Bank would need to see the detail

The Rural Bank’s general manager of sales, marketing and partnerships, Simon Dundon, said the bank would support any initiative that makes it easier get young people on farms, and particularly to give young farmers a head start.

“But we would actually need to see the detail on how it is going to be rolled out and what the proposal looks like so we can properly evaluate it.

“It’s so scant on detail that it’s a bit hard to answer, but it certainly has some merit and it’s an area that has been highlighted by David Littleproud in the (National Rural Press Club) debate, that I think is utmost in our minds for those of us that are in lend, but also closely associated with the industry,” he said.

“I think sometimes the demographics can be a bit misleading, but we do know that there are less farmers every year, they are a reasonably aged cohort and anything we can do or can be done to encourage younger people and keep younger people in the game…

“I think we are seeing a lot of young people coming back into agriculture and across the board being involved, and anything that is going to support that would be good.”

On whether the proposed scheme might help lower the risk profile or interest rate for a bank loan applicant, Mr Dundon said “it could”.

“That’s the purpose of a government guarantee, but the devil is going to be in the detail.”

Mr Dundon said the initiative proposal is timely with the bank about to release its latest Australian Farmland Values report, due out on May 3.