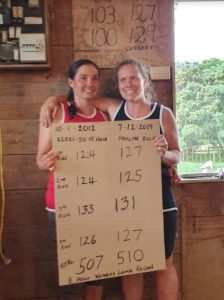 The 33 year-old became the first North Hemisphere-born woman to set a shearing record on Saturday when she shore 510 strong wool lambs on Saturday at Whitford Farms, Waikaretu.

Bolay, 33, needed an average of 63.5 lambs an hour, caught, shorn and dispatched, and was constantly on target through the day of four two-hour runs from the start at 7am to the end at 5pm with 30-minute breaks for morning and afternoon ‘smoko’ and an hour for lunch. 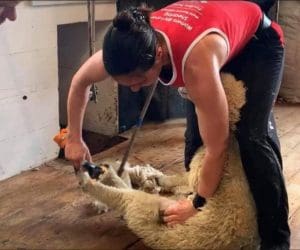 World Sheep Shearing Records Society secretary Hugh McCarroll said it was a “tough day” for Bolay, with humidity taking over from cooler early conditions and the coopworth lambs coming from three different properties in the area.

He said the wool shed was packed with shearing fraternity and local supporters as the countdown came towards the end.

“She was pretty emotional at the finish,” said McCarroll.

The event was managed by employers Sam and Emily Welch, both also World record holders, with Emily having set her 9-hours record in the same woolshed in 2007.

Bolay is from a farming family in Fairford, Manitoba and represented Canada as a shearer at the world shearing and wool handling championships in Masterton in 2012 and again this year in France.

After her triumph, Pauline posted that she had so many people to thank who made her shearing world record a reality.

“Words are not enough to express my appreciation and gratitude.

“Thank you from the bottom of my heart to my whole support team that was there on the day and the months leading up to the day,” she wrote.

“Thanks to my friends and family for their immense support.

“A very special thank you to the crew from Clayton-Greene and Welch Shearing for being my pen boys on the day,” she said.

“You all did a great job warming up the lambs and filling up the pen, and catching my drink cups.”