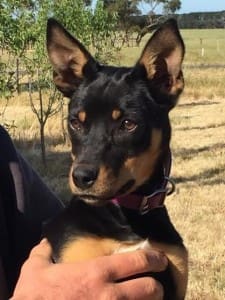 THE first sheep have been listed on Australia’s new online selling platform livestock.com, but since the format’s launch in April this year, beef bulls, heifers and working dogs have dominated the listings.

Today Victorian livestock contractor Damien Clifford will sell his third dog on the time-based online selling platform – a 16-week-old Kelpie pup Myamba Jose – and the proceeds will go to the Riding for the Disabled Association of Australia.

“I’ve always thought it was a pretty noble cause,” Mr Clifford said.

The Woorndoo-based contractor likes the livestock.com.au concept, but he has found the online platform works best for him when he links his listings to other social media formats – promoting them on his Facebook page, his business web page and YouTube, where he can add videos “for more comprehensive viewing”.

Earlier this year Mr Clifford sold two trained dogs for $3000 and $3500 in September and he holds the current page view record on livestock.com.au of over 550 views in seven days. Myamba Jose is by Damien’s open dog and state championship trial finalist Disco, which will represent Victoria (with Gary Sharrock’s Able Alby) at the national yard dog championships next year. Jose’s mother Kippakoop Snippets is a very calm, strong bitch that has won a novice trial at Swan Hill, he said.

Mr Clifford said Jose is super-friendly and showing class on stock. More details are on https://www.livestock.com.au/Listing/Details/240915/Myamba-Jose The pup has had more than 670 page views on livestock.com.au and 5500 people are following it on Facebook.

The livestock.com.au site was launched by Elders in April this year, pitched at seedstock producers with single or small numbers of animals to sell, with payments held in trust until a successful delivery is made. The first sale featured Shorthorn Beef bulls that sold to $3700 and heifers that made up to $5101, with good clearance rates. Te Mania Angus have also sold animals on the platform, and it is currently also listing Romagnola bulls from the Wyoming stud in Queensland.

“Inverbrackie are trait leaders for the Border Leicester breed and we have listed the pick of their paddock rams for a seven-day period.

“Considering the on-property sale averaged $1550 and $1200 for private auction rams, we have priced these rams to encourage some buyer interest.”

“The bread and butter for livestock.com is the studs which don’t have the capacity to run an on-property auction.

“They may be that niche breed, or a hobby breed,” he said.

Mr Howie said livestock.com.au allowed breeders of any livestock to list an animal for open auction, and it also lifted the profile of the stud.

On-property ram and bull sales among major studs had been very strong this year, with fewer sires available for private sale after auctions, he said.