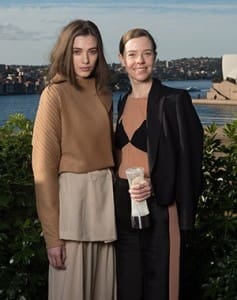 And fellow Sydney designer Bianca Spender was awarded as winner of the womenswear section of the regional final at the Museum of Contemporary Art Australia in Sydney yesterday.

The designers each received A$50,000 and an opportunity to represent Australia and compete in the prestigious international Woolmark Prize final. The final for menswear will be held in Florence in January 2016, and the womenswear final will be held in New York in February 2016.

The Australian winners were drawn from 10 entrants and a record 70 labels have nominated in regional Woolmark Prize competitions across 23 countries.

The Woolmark Company managing director Stuart McCullough said the International Woolmark Prize is the company’s commitment to educating the next generation of fashion industry leaders about the extraordinary potential of Merino wool.

“We congratulate P.Johnson and Bianca Spender on their wins.

“With the number of countries represented the largest yet, the International Woolmark Prize is a truly global celebration of emerging talent and most importantly provides the winning designers with a unique opportunity for commercial success on a global scale.”

Patrick Johnson was inspired by the Sydney Opera House 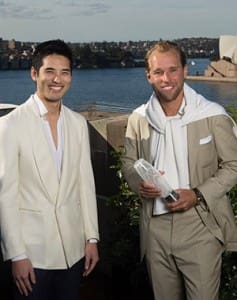 Patrick Johnson drew inspiration for his winning P.Johnson designs from the iconic Sydney Opera House. He grew up on a Merino sheep station north of Adelaide.

“I work with wool every day,” he said.

“But this prize really made me refocus on the relationship with my weavers and the technology we use around wool, thinking ‘okay where can we take this fibre, where can we go with it, and that’s been a really powerful thing.”

Bianca Spender impressed the judges with her sheer wool gauze trouser suit and described her involvement in the prize as “life-changing.”

“We all build a journey in our work and I am amazed that this is part of mine,” she said.

“I have had such a long affair with wool and it feels like things have all come together to tell a story that I’m very passionate about.

Edwina McCann said Patrick Johnson’s construction was beautiful, the make was exquisite and there was some really great innovations with Merino wool.

“And the fact that he grew up on a Merino wool farm means he is genuinely passionate about using the fibre.”

“I felt she had a very earnest sensibility about her.

“There was very interesting detailing and an artisanal approach to her work and I wanted to see more.

“It had an element of being ethereal, a bit sublime and a little bit romantic, in a poetic way.”

Australian Wool Innovation said it is vital for AWI to demonstrate the key role for Australian Merino wool in the international fashion industry via Woolmark, to increase the global demand for Australian wool.

Connecting the world’s leading fashion designers with Australian Merino wool is extremely important due to the enormous influence these designers have in setting global textile trends for mainstream retail brands, the AWI statement said.

For the next six to seven months the two winning designers will be required to develop a capsule collection in Merino wool, to be showcased at one of two events that will highlight the six menswear finalists and six womenswear finalists selected from across the globe.

The global finalists will compete for the coveted International Woolmark Prize and A$100,000, and the opportunity to be stocked in the most important retailers of the world, including Harvey Nichols (London), 10 Corso Como (Milan, Beijing and Shanghai), Matchesfashion.com (online), Mytheresa.com (online), Saks Fifth Avenue (NYC), Joyce (China), Isetan Mitsukoshi (Japan), Boutique 1 (UAE) and David Jones (Australia).