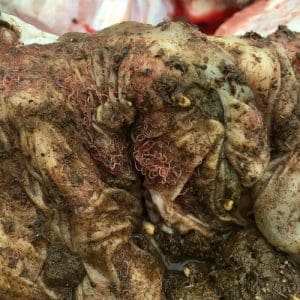 Barber’s Pole worms in a lamb’s abomasum are red due to feeding on blood.

AGRICULTURE Victoria has urged sheep producers to be alert for sings of Barber’s Pole worm in their flocks, with higher worm burdens expected due to reduced pasture length in some areas.

Barber’s pole worm (Haemonchus contortus) is a blood sucking roundworm of sheep and goats, with minor crossover into cattle.

The worm gets its name from the ‘Barber’s pole’ colouration of the female worm as its blood-filled intestine and uterus intertwine.

Agriculture Victoria said typically, Barber’s pole worms favour warm, humid conditions. Its lifecycle is like other roundworms. The eggs are passed in an animal’s faeces, they hatch, develop to an infectious stage, are eaten by a susceptible animal and develop into an adult worm in the animal’s fourth stomach.

Signs of Barber’s Pole worm include anaemia due to blood loss and lethargy. Affected animals may flop down when mustered briskly and have extremely pale inner eyelids and gums.

All body condition types can be affected and in more chronic cases you may see ‘bottle-jaw’ due to loss of blood protein.

Two to three centimetre long adult female worms can be easily seen on a fresh post-mortem in the stomach contents of an affected sheep.

Agriculture Victoria said Barber’s Pole worm can be managed and treated with much the same approach used for other roundworms.

An internal parasite control drench, administered by either injectable, pour-on or orally are most effective. Affected stock should be moved onto a clean paddock so worm egg counts can be monitored.

Drenching thresholds may be lower in south-west Victoria

Snior partner and veterinary consultant At Livestock in Hamilton, Dr Andrew Whale said although Barber’s Pole is not presenting as a problem in his area, the worm can quickly contaminate pastures if present or introduced. The worm’s presence is often not indicated by scouring sheep and producers should monitor for high worm egg counts in their flocks.

“If you monitor worm egg counts regularly you will pick up an issue before it becomes a problem.”

The Livestock Logic June newsletter said pasture growth around Hamilton in south-west Victoria has been reduced during February-May and resulted in significant worm burdens being detected 4 to 6 weeks post drenching due to the reduced pasture height. The veterinary consultancy expected general worm control to be a significant issue throughout Winter and into Spring.

“This year has the potential to be a high challenge year and for pre-lambing treatments this means you may need to limit the time between drenches and therefore try and administer the pre- lambing drench within a month of the lambing date.

“This is a balance between best practice worm control and minimising the risk of metabolic disease from handling ewes close to lambing,” the newsletter said.

For further advice can contact their local veterinarian, Agriculture Victoria veterinary or animal health officer, or in NSW the Local Land Services or visit WormBoss at https://www.paraboss.com.au/wormboss.php.