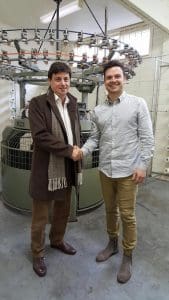 AUSTRALIAN Wool Network is expecting to potentially pay a 130-150c/kg clean premium for non-mulesed Merino wool to expand production of base layer garments by its newly-purchased company Hedrena.

Demand for fine and superfine non-mulesed wool is expected to increase with AWN’s takeover of the Geelong-based base layer woollen garment manufacturer and Woolmark licensee.

“It’s good news for superfine wool producers in a market that has been over-supplied and very tough for several years.”

“It (non-mulesed wool) is an evolutionary part of the wool industry which I think will eventually become standard, but I certainly understand the management issues that are created by non-mulesed,” he said.

“But at the end of the day we have to sell the wool to a consumer who is happy with the actual product.”

“The reality is that we are still finalising the regional (DNA) branding areas that we are going to target using Hedrena, but we will be starting to source wool almost immediately with the idea of them being in Hedrena garments before Christmas.”

Mr Colley said AWN has done several independent studies on what wool growers would need to cease mulesing to determine its premium prices and expected to pay a premium above the ruling AWEX Micron Price Guide benchmarks.

“It is yet to be finalised, the final figure, but it will be somewhere between $1.30 and $1.50 a kilogram clean above market.”

Hedrena was a pioneer of the next-to-skin base layer market, using non-mulesed Australian Merino wool, which is spun overseas and knitted, cut and sewn at the Geelong West factory. The company was originally established in 1992 by Hedley and Irena Earl to value add to their superfine Merino flock at Ocean Grove.

The acquisition comes on the back of the opening of Australian Wool Network’s new Hysport factory at Carrum Downs in March. Hysport manufactures garments made from pure wool and wool blends, which are marketed under the brands, MerinoSnug, Only Merino and OM.

“That in turn will sell more garments which we will need more wool for.

“They (new retail stores) will be domestic but the end-game is export to the Northern Hemisphere.”

Hedrena staff and the company’s specialised circular knitting machinery will be relocated to Carrum Downs this month. A new model would outsource the cut measure and trim stage of garment creation internationally, with more than 70 percent of the garment cost born in Australia.

Mr Colley said there would be distribution synergies with Hedrena products to be marketed through the 282 outlets that Hysport supplies and the MerinoSnug garments would be sold through the Hedrena retail outlets at retail stores in Melbourne’s Collins Street, Glenferrie Road in Malvern, Geelong, Sydney CBD, St Ives and Adelaide.

Mr Colley said the acquisition would create job growth, with new roles to be created at Carrum Downs across all areas – accounting, administration, technical and marketing.

Mr Colley said production capacity would be increased on top of a strategy to open new retail stores later in the year.

“All of Hedrena’s retail outlets will be retained and we are in negotiations to expand the outlets right across Australia,’’ Mr Colley said.

“Hedrena’s sustainable lifestyle wear is a totally different product to the MerinoSnug range but is complementary.

“It is a natural Merino product and will appeal to the same customer base.’’

“AWN has provided Hedrena an incredible opportunity to grow its retail network domestically with longer term plans to expand internationally,’’ he said.

The Earl family established a goal four years ago to dispel the myths and misconceptions around wool.

“We wanted to have more people around Australia in their 40s and beyond discover the benefits of modern and innovative Merino wool apparel.

“Today a new chapter commences and we can take a significant step forward to realising this vision,’’ Mr Earl said.

A lack of capital had inhibited Hedrena’s expansion in the past, but customers would now have more choice combined with greater product innovation, he said.

New export markets by end of the year

Mr Colley anticipates new export markets opening for the Hedrena product by the end of the year, creating further opportunities to drive premiums for woolgrowers.

AWN continues to be the nation’s only vertically integrated wool broker with its own Australian based manufacturing facility.

“We will be adding our DNA (Direct Network Advantage) strategy whereby we take the wool from the sheep right the way through the pipeline into the Hedrena product with the support of our regional branding.

“It adds to the value of the garment and lets the consumer know where their wool comes from,’’ Mr Colley said.

AWN will re-apply for the green and gold Australian Made label to be carried on the new Hedrena products.

“This is a great opportunity for the growers and supporters of AWN to be involved in a process which genuinely links growers to the retail end, and to know their wool is going into an Australian made article produced by an Australian company.

“Sheep to shop, fibre to fashion, it’s always been part of the charter so now we can really expand and deliver it, ’’ Mr Colley said.