This is despite a commitment from AWI chief executive officer Stuart McCullough at Senator Glenn Sterle at an Estimates hearing on 23 March this year that the CEO would check what was written to Mr Olsson.

The failure of AWI to provide the relevant legal advice has prompted Mr Olsson — whose nomination for the election was disallowed — to demand that AWI company secretary Jim Story and chair Colette Garnsey front the next Senate Estimates hearing on 27 May.

The office of Labor Senator Glenn Sterle has confirmed that Mr Story and Ms Garnsey will be asked to attend the hearing, to bring the relevant legal advice and be prepared to answer questions about Mr Story’s 23 July text.

Mr Olsson this week said his treatment prior to the 2019 AWI election was “tantamount to vote rorting in the wool industry.”

“Where is all this legal advice they were supposed to give to the Senate? They haven’t got it.”

Mr Olsson believed that the AWI board was not consulted about, nor made the decision, his disqualification from standing for the 2019 director election.

“Jim (Story) made that by himself.”

On 23 July 2019, as an aspiring AWI board nominee, Mr Olsson received a text from AWI company secretary Jim Story that “it is permissible albeit unusual for you to have several candidates named on the nomination form.

Mr Olsson wanted to collect the signatures of 100 eligible AWI shareholders to support his nomination and that of Professor Peter Windsor and Dr Dominique Van Der Saag on one nomination form.

However, when asked at the Estimates hearing of the Rural and Regional Affairs and Transport Legislation Committee by Senator Sterle in March if anything was written giving Mr Olsson permission to run a joint ticket in the election, Mr McCullough said:

“I’ll have to check what was written to Mr Olsson, but certainly the advice back from our legal counsel was no.”

Mr McCullough agreed with Senator Sterle that Mr Olsson later received advice from Mr Story that a joint ticket would not be allowed.

“No, that sounds right. After we sought legal counsel, we wrote back to him,” Mr McCullough said.

AWI to date has refused to acknowledge the existence of the legal advice referred to in Mr Story’s 23 July text. When asked in March if AWI had received two sets of legal advice pertaining to Mr Olsson’s multiple candidate nomination form,  an AWI spokesman said only that “AWI follows best practice when it comes corporate governance,” and that it had “a full record of correspondence in regard to the matter.”

“That decision was based on legal advice and in consultation with Link Market Services.” 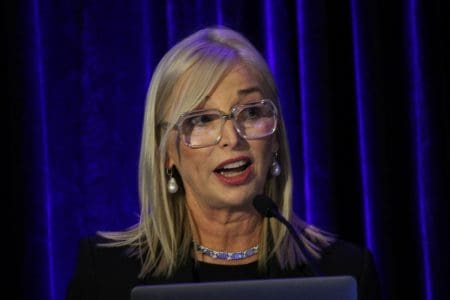 However, AWI’s failure to present the relevant legal advice on the joint ticket issue has sparked a demand from Olsson that Mr Story and AWI chair Colette Garnsey be requested to give evidence before the RRAT committee.

“I actually asked permission (to run a joint ticket) and there was any doubt then, why did it change?

“He (Mr Story) is the legal entity of the company.

“It was his legal advice that I was OK to do it, but what changed?”

Mr Olsson also believes that there should be evidence, either in AWI or Link Market Services records, of the joint candidate tickets he claims were run in earlier AWI elections.

“I totally believe it exists but that is a moot point here.

“The point is that I was given advice that I could do it,” he said.

“I would challenge any politician, no matter what side of the house you are from, if you were standing for a legitimate seat and you were given rules and the rules change, how would they feel?

Mr Olsson queried why AWI has not presented the legal advice requested by the Senate committee.

“Where is the legal advice?

“It’s a matter for the Senate to chase up now.”

Mr Olsson has claimed there was board interference in his nomination process, which contravenes AWI’s Statutory Funding Agreement with the Federal Government on the issue of agri-political activity.

“Based on the AWI’s Statutory Funding Agreement which forbids agri-political activity and to clear AWI’s name, it is in the best interests of AWI and the industry that Mr Story fronts up to Senate Estimates Committee and explains exactly what happened.

“Was it all his own advice or was he influenced by board members?” he asked.

“This is a very serious issue of potential board interference in an election process.”

Mr Olsson said the issue also had to be investigated by the Department of Agriculture Water and the Environment, and Minister for Agriculture David Littleproud.

“This now a matter for the minister to decide if there has been political interference with the democratic process for the protection of the status quo (on the AWI board), because they know what I did last time.”

Mr Olsson said in his time as an AWI director from 2008-11, with Roger Fletcher and Laurence Modiano he initiated the cutting of AWI staff back to 80.

“We put $120 million in the bank, we cut 50 or 60 useless projects and we took everyone out of their comfort level and made them perform as any busy would make them do.

“Quite frankly, I think AWI is terrified that I might get back on that board, because I might make them perform, I would make them jump through hoops to ensure growers were getting the best out of their levy.”

Mr Olsson’s subsequent 2019 nomination contained 137 signatures, but of which only 97 were verified by AWI and Link Market Services, when 100 were required. However, he believes at least 100 were the signatures of eligible AWI shareholders and valid.

“I found two extras who were shareholders by myself and all I need was one more.”

Mr Olsson said he had been elected to the AWI board twice with “no problems.”

“Now it is a problem, how convenient.”

The relevant section (13.3B) of the AWI Constitution at the time of the 2019 election stated that a person other than a retiring director is eligible for election to the office director by means of a written nomination signed by in excess of 99 (or such lesser number (if any) as may be prescribed by the Law) of eligible shareholders. This clause did not stipulate that a registered shareholder’s signature has to be validated with details consistent with the register by a certain deadline to be considered eligible. Mr Olsson maintains that Mr Story told him to get as many signatures in before the deadline and these could be validated afterward.

This month AWI submitted advice to the Senate from its lawyers Herbert Smith Freehills that under AWI’s current Rules and Procedures Governing the Election of Directors nomination forms completed by candidates and accompanied by all required information must be received by AWI by the nomination deadline.

However, the current version of the rules and procedures on the AWI website, reviewed in May 2019 and amended in January 2020, only says that the nomination and consent (signature) should be received by AWI not less than 60 days nor more than 78 days before the annual general meeting.

The legal firm said Mr Olsson was warned at least twice not to submit a nomination form at “the last minute”, that AWI’s Rules and Procedures Governing the Election of Directors contained a requirement that the company secretary will endeavour to resolve inconsistencies between shareholders’ names and addresses on nomination forms and “our opinion is that this requirement was clearly complied with in relation to Mr Olsson’s nomination.”

However, Mr Olsson said it was not his fault that AWI and Link Market Services was unable to verify the signatures he forwarded by the nomination deadline.

“I’m legally right, they are wrong.”

Mr Olsson believed the Senate has been misled.

“The answers were not provided to the questions on notice, they have been glossed over.

Mr McCullough today did not respond personally when asked why AWI has not supplied to the Senate the legal advice company secretary Jim Story referred to in his 23 July 2019 text to Chick Olsson, or the later legal advice disallowing a joint ticket that the CEO referred to at the March Senate Estimates hearing. Instead, an unidentified AWI spokesman said: “All relevant material was provided.” The spokesman said it “is untrue” that AWI is trying to mislead the Senate by not providing the legal advice.

The spokesman also said joint election tickets are possible once each candidate has confirmed their eligibility by attaining a minimum of 100 signatures. But the spokesman did not state where in the AWI Constitution or rules and procedures the running of a joint ticket for the collection of signatures is specifically disallowed.

“In 2019, AWI had repeated contact with Mr Olsson about his candidacy – in the end he did not get the minimum number of eligible signatures,” the spokesman said.