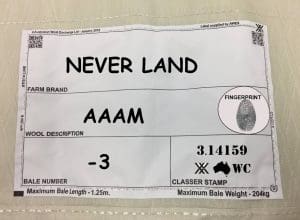 Can this bale be traced to this fingerprint?

AUSTRALIAN Wool Innovation might have been beaten AWEX to the line with their WoolQ eSpeci, but the latest innovation for wool bale traceability tops that – hands down.

On March 31, AWEX announced it was using fingerprint technology to increase the integrity of wool bales in a new one-day trial on April 1.

Using indelible ink, each bale will bear the fingerprint of the classer, AWEX said on its Facebook page. No doubt the innovation would need a central fingerprint registry overseen by AWEX chief executive officer Mark Grave.

AWEX said the ingenious part of the trial is that it will be equally applicable to right and left-handed classers.

Reactions to the unique idea were initially mixed from some of AWEX’s Facebook friends.

Terry Keown was glad it applied to left and right hand classers, but hoped it wasn’t just for the professional classers.

Shelley Nightingale could see inky fingers being an issue and Tasha Hira didn’t like idea.

“AWI and AWEX have you actually given this some serious thought? Or is this just another GREAT idea??

“Sooo is everyone ok with having their prints available for whoever to see or copy???”

“Soo what happens if a classer chooses to not put their print their (there)???”

Sherryn Hill also was not sure.

“What next!! What happened to taking the classer’s stencil and signature as repeatable??” she asked.

“Had one meeting never heard anything again,” he wrote.

But thankfully for many of AWEX’s Facebook friends fingerprint-branded bales didn’t wash and the one-day trial started and finished on April Fool’s Day.