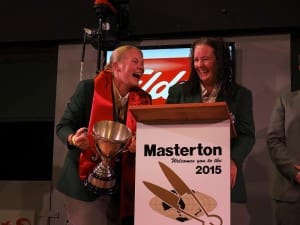 Mr Laing said New Zealand went into the test with wins in 25 of the 33 tests since the trans-Tasman woolhandling internationals started in 1998. New Zealand won both of last year’s tests, in Masterton and Errowanbang, NSW, and Australia had only won twice previously in New Zealand, in Masterton in 1999 and Christchurch in 2011.

Moran said she was most pleased by the performance of her teammate, who won a place in the team by finishing second to Moran in the Australian Championships at Errowanbang in November. Moran told Mr Laing how she brought a sponsored team of seven younger competitors to the New Zealand finewool championships in Alexandra in 2012, and saw Smith have a “major meltdown.”

“If there was any one of them I thought wouldn’t make it back it was, but she has.

Moran, who has won two Australian championships and represented her country at last year’s World Championships in Ireland said that the win had fulfilled her expectations, although she would have liked to have reach a Golden Shears Open quarter final. But it’s up to Smith and other younger competitors to target the next World championships, being held in Christchurch in 2017, she said.

Mr Laing said Smith may have momentarily thought about another meltdown as she raised the victors’ trophy in the air in front of 800 spectators, and watched in horror as its lid flew off the stage. The pair said they were confident about their job during the test in which each team handled four Merino fleeces and four standard breed strongwool New Zealand fleeces. Moran was, however, worried about the quality points being determined “out the back” by the judges before the final result was known. 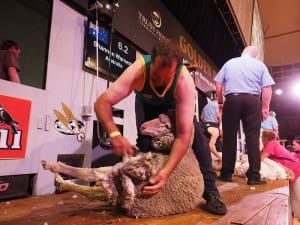 Mr Laing said three Kiwi shearers – Nathan Stratford, Colin O’Neill and David Buick – tried on Saturday night to exact some honour for the home country in the shearing test against Australia. Australian teams had won seven of the countries’ last eight trans-Tasman matches, and created a 28-all tie in the numbers of tests won since regular trans-Tasman exchanges began in 1974-75.

The Kiwi team of Nathan Stratford, of Invercargill, Colin “Mouse” O’Neill, of Alexandra, and David Buick, of Pongaroa, were easing favourites before the test started, but despite this the Australian team members Shannon Warnest, Daniel McIntyre and Damian Boyle, were victorious on quality points.

The Australians put their country ahead on the trans-Tasman tally board, adding an eight-straight win with a quality performance, winning with 260.679 points versus the Kiwis’ 281.845 points. Warnest showed his experience under pressure to also win the Joseph Paewai Trophy for the best quality performance. Mr Laing said Warnest has shorn more trans-Tasman tests than anyone else and has won two world titles on Merino sheep, while Boyle has won New Zealand’s only Merino event five times in a row in Alexandra.

There have been 56 tests since in the series, and wins had been tied 28-each as a result of Australia winning the last three in Warrnambool(Vic) in 2013 and Masterton and Errowanbang(NSW) last year, Mr Laing said. The shearers each shore six finewool Merinos, and three strongwool ewes and three lambs.