Aussie shearers make it a double header at Adelaide Oval 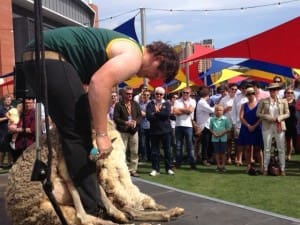 HOPES of getting shearing recognised as a sport were boosted by an Australian win on the board in an Aussie-Kiwi test with a difference at the Adelaide Oval at the weekend.

At the invitation of the South Australian Cricket Association, Sports Shear Australia Association with support from Australian Wool Innovation ran a three-part shearing test in the members area at the Adelaide Oval while the Kiwis fought the Aussies with bat and ball on the pitch.

Sports Shear Australian chair Stephanie Brooker-Jones said the Australian shearers, South Australians John Dalla and Shannon Warnest won the opening match on the Village Green members area at the oval on Friday night, but the Australian-based Kiwis – Imran Sullivan from Kangaroo Island and Rick Chilcott from Lucindale — reversed the result in the second match on Saturday, winning by 10 seconds.

“Then the Aussies pegged them back and won by eight seconds on Sunday,” Mrs Brooker-Jones said.

Just over an hour and a half later, Australia wrapped–up the cricket test, chasing down the target of 187 set by the Black Caps to won by three wickets.

Although the shearing test was not held on the oval nor televised to the cricket crowd, Mrs Brooker-Jones believed it gave shearing invaluable exposure.

“We were the guests – the invited entertainment.

“So instead of having the fashion parade or dancing girls, we had sheep shearing,” she said.

Ms Brooker-Jones said everyone involved was decked out in their Sports Shear Australia uniforms to “look the part”.

“Yes, there were a lot of country people there, but there are 15,000 SACA members who had no idea about sheep and wool.

“So it is bringing sheep and wool to the great public.”

Sports Shear Australia hoped to make another submission to the Australian Sporting Commission next year, to have shearing recognised as sport in Australia.

“Our main things is getting member numbers.

“Each little show has probably got a database of members, but we need to get those country shows to send it back to their state body and onto their national body.”

Mrs Brooker-Jones said the baggy green cap contains wool and perhaps in the future Australia’s cricket jumpers might also be made from wool again.

“That’s what we said to Jim, that really is the next stage.”