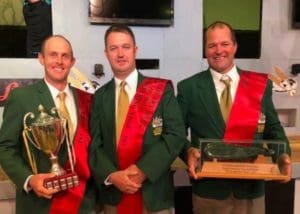 Two trans-Tasman tests at the Golden Shears have been shared 1-1 each after the shearing team of world champions John Kirkpatrick, Nathan Stratford and Rowland Smith was unable to keep in touch with their Australian visitors on the fine-wooled Merinos that dominated their shearing match.

It was Australia’s 33rd win in 63 tests since the annual home-and-away trans-Tasman series started in 1974, and it provided some payback for New Zealand’s win in a wool handling test the previous night, in the latest battle of Henare and Baty against Morris and Huf.

Australia effectively had the shearing test won by the halfway stage, with Wingfield and Warnest being more than two sheep clear of the best of the New Zealanders as the Kiwis changed onto the crossbreds, after a tough battle through six Merinos each. 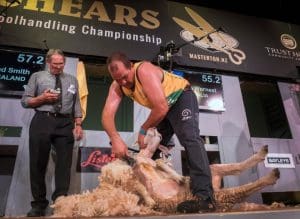 The shearing test win extended the amazing record of South Australian shearing legend Shannon Warnest who has shorn in 31 of of the tests, the last 29 in a row. He was the best individual in a trans-Tasman shearing test for at least the 15th time.

The wool handling test was held on Friday night but an announcement of the result was unable to be made because of the collapse of veterans event competitor and former Golden Shears Open wool handling champion Mi Nooroa on the stage, bringing an early end to the night’s programme.