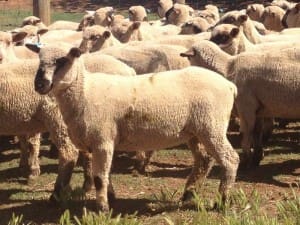 These early October Hampshire Down cross lambs, 17.9kg cwt and mostly score 2 and 3, sold for $102.50 at Euroa, Victoria, on AuctionsPlus last week.

“We are just getting stronger and stronger support from the south – people are seeing the benefit in selling their store lambs this way.”

This trend is expected to continue this week, with about 50,000 sheep and lambs due to be offered, plus about 11,000 lambs in the North East Victorian Lamb Backgrounder and Finisher sale tomorrow.

Ms Adams said store lamb prices showed little movement on last week, with variation of a couple of dollars up or down within weight brackets.

The top-priced terminal lambs of the week were 560 mid-November shorn Suffolk and White Suffolk lambs at Kingscote on Kangaroo Island weighing 17kg cwt that sold for $108.50.

The NLRS said the quality of the trade and heavy unshorn and shorn new season lambs was good. A larger and plainer run of store lambs was penned for the usual buyers and a small restocking gallery.

The NLRS said lamb quality remained similar to the previous sales. There was a good offering of finished lambs available, along with the plainer types. Not all the usual buyers were present and competing.

The NLRS said lamb quality was plainer than last week. Not all the regular processing orders operated, while store orders remained similar, with competition from Corowa and local agents.

Prices for most slaughter lambs were similar to the last sale, taking into account the plainer breeding and carcase finish of the lambs offered. Some of the small restocking lambs averaged a dollar or two dearer. The market reached a top of $140 for a small pen of export weight young lambs. The supply of good trade and export weight young lambs was very limited and only about six pens sold above $125 to a top of $140. The general run of domestic slaughter lambs sold from $101-$120. Light processor and restocker lambs made $62-$96. On a carcase basis, some price variance was recorded due to mixed quality and breeding. However, the better presented lambs still sold in an estimated range of about 485-520c/kg cwt.

The sheep offering was also very limited in lines and quality. Prices were similar to a few dollars dearer on the medium weight run of trade weight mutton. Heavy crossbred ewes sold from $82-$92 and heavy Merinos made from $80-$92. Light sheep mostly sold from $45 and $70.