AuctionsPlus 100,000-plus sheep and lambs record 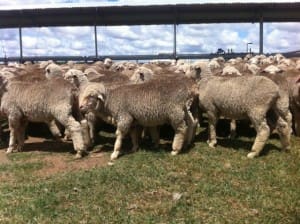 The real-time internet auction company offered 100,297 sheep and lambs, including 23,000 in the breeder and replacement ewe sale last Tuesday.

Merino wether lambs were also offered in larger numbers and enjoyed a resurgence in price, but store lamb prices were variable on last week, with the lighter end steady but heavier lambs back around $5, she said.

“There has been a little bit of a correction in the store lamb market and so people are setting reserves where the market has been.

“But after the sale there have been a lot of sales negotiated.”

“There wasn’t a whole lot of lambs that made over the $100 mark, but there wasn’t the weight in a few lines that we had the previous week either.”

Ms Adams said there was an upturn in breeder ewe prices across all the sales.

“Unjoined Merino hoggets sold from $55-$157 and young ewes joined to terminal sires made $150 to a top of $168 for rising two year old Gum Hill blood ewes in lamb to the Suffolk.”

After Friday’s saleyard sales, the National Livestock Reporting Service reported its daily lamb and mutton indicators as mostly firm, but all indicators except restocker lambs declined over the week.

The NLRS said lamb quality continued to be mixed, with well-finished and plainer pens yarded. Heavy and extra heavy lambs made up the majority of the offering. Most of the usual buyers competed in a fairly steady market.

The sheep were mostly Merinos and quality was very mixed. Prices remained fairly similar with Merino ewes selling from $80-$117. Crossbred ewes ranged in price from $86-$114 and Dorper ewes sold from $76-$110.

The NLRS said lamb quality was very good among the well-finished extra heavy lambs. Mainly heavy weight lambs were penned, with trade and light lambs in limited supply. A few store lambs were offered and all the buyers were present except for one. Competition improved compared to the previous week resulting in a dearer market.

The market reached a top of $163 for a pen of export lambs estimated to have a carcase weight of about 28kg. It was one of just a few sales of heavy lambs over $150. The strongest demand from meat buyers on the day was for heavy trade lambs which sold from $128-$141, putting the best quality pens at around 540c/kg-560c/kg cwt.

There wasn’t much price change on the plainer quality and lighter domestic lambs which generally sold from $90-$112. Some of the plainest and smallest lambs were cheaper at $25-$50, due to less restocker support.

Agents also offered some feature lines of young joined crossbred ewes, most 3-4-years, which sold to limited restocker interest. Two pens sold at $156 and $150, with the balance passed in.

The mutton market was firm to slightly dearer in places, with heavy crossbred ewes selling from $100-$115, while medium and light weight slaughter ewes ranged from $40-$84. Estimated carcase prices for sheep did show a lot of variance due to the limited and mixed quality yarding.