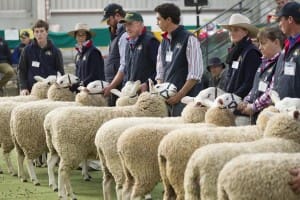 WOOL and sheep meat producers from around Australia and the world will be in the central Victorian city of Bendigo over the next three days for the nation’s biggest annual sheep show.

The Australian Sheep and Wool Show from July 15-17 has attracted record entries from breeders – with more than 3000 sheep representing 28 breeds from breeders in five states expected to be on display or in the various judging events.

The sheep show entries are the biggest in the 139-year history of the show and include the show’s biggest ever number of sheep – 188 entries – in the 2016 feature show breed, the dual purpose Corriedales, from 26 studs, including six school flocks.

This year the show also features on the program of the Global Dohne Conference, with Dohne breeders from several countries attending to see increased Dohne sheep and fleece entries, before continuing the conference at Dubbo in New South Wales.

The annual event at Bendigo’s showgrounds features a number of events for stud and commercial sheep breeders, and wool and lamb consumers.

– Australia’s largest fibre market of yarns, garments and craft equipment with more than 300 retail stalls. There will also be a fashion parade of winning wool craft designs at 11am each day of the show.

– the Landmark Australian Fleece Competition in which 481 entries from breeders, agricultural colleges and schools will vie for 45 prizes. Proceeds from donated fleeces will be given to the nominated charity Diabetes Australia. A feature this year is the big Dohne fleece presence – about 40 fleeces are entered.

– the Bendigo Festival of the Lamb this year will feature a new multicultural approach including flavours and dishes from Australia and around the world and tips from experts. School children will be encouraged bring a modern twist to the junior cooking contest with some new ideas. Bob the Butcher will also star with his accent on new lamb cuts.

– shearing and wool handling events on the Northern Shears program, including the state championships and culminating in selection of the Victorian team for the national titles at Warialda in NSW in October.

– the Young Studmasters’ Muster on Friday evening, featuring the winners of the Young Champions Award run in conjunction with the Royal Agricultural Society of Victoria.

– the annual breeders’ dinner on Saturday night will feature the ABC’s Pip Courtney as MC and guest speaker Professor Jon Hickford conducting an interview session with young agribusiness professions. The National Fleece Competition and president’s award winners will also be announced.  At a separate dinner the winners of the prestigious Merino National Pairs – the top Merino ewe-ram combination – will be awarded from the state finalists.

– the Women of Wool luncheon on Friday will feature presentations from the Women of Wool ambassadors and there will be a sneak peek at creative wool fashion by designers across Australia. The WoW ambassadors this year include Rural Bank CEO Alexandra Gartmann, wool craft innovator Charly McCafferty, inspirational Strathewen Primary School principal Jane Hayward and Whitehouse Institute of Design head of strategy and development Karen Webster.

– the Ag Careers Forum – Soils Make Sense – featuring sessions by Lincoln University professor in animal breeding and genetics Jon Hickford, who is expected to open up a whole world of career and employment possibilities.

– the first Beef Cattle precinct at the show, showcasing a range of breeds and studs from northern Victoria and southern NSW.

– for the first time, a yard dog competition over the three days organised by the Victorian Yard Utility Farm Dog Association in the main showground arena.

On Monday July 18, selling agents Elders and Landmark will offer 96 Merino and Poll Merino rams and a stud Merino ewe, including several show champion winners in the annual sale. On Sunday, the Southern Region Supreme Dorper and White Dorper sale will be held.

Show is the largest event of its kind in world 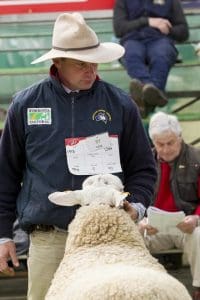 Australian Sheep Breeders’ Association president Malcolm Starritt said the show was the largest event of its kind in the world and looked set to again break records – from competition entries to demand for our stallholder space and sponsorship interest.

“For 2016, there are 22 sub-events under our valuable umbrella and together, they put the broadest possible spotlight on all aspects of our industry for a growing local, regional, national and international audience.

“Each of these events represents an industry community in itself, but bring them together and we have a powerful, concentrated presence,” he said.

“Our audience is also diversifying, with increased interest in what our food providers and fibre fashion experts are offering.”