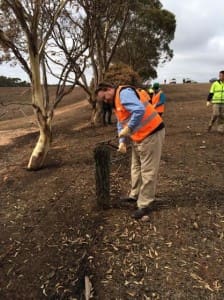 Agistment is being sought for thousands of sheep in the aftermath of the recent 5000 hectare bush and grassfire at Moyston in western Victoria.

Nearly two weeks after the fire killed about 5000 sheep and district farmer Charlie de Fegely said farmers were still deciding what they were going to do.

“We are giving them time and space.

“We are looking for agistment for say 4-5000 sheep, but we still don’t know (how many) because we haven’t been able to plough our way through the bureaucracy of good and bad numbers,” he said.

“We are doing each property case-by-case and the best thing some farmers can do is get agistment and some are taking them off as we talk.

“There will be a need for fodder and we are still putting the call out there until we really firmly know what we need.”

It was known there were about 18,000 sheep on the 25 kilometre long fire zone, but it is still not clear exactly how many survived or where they are.

“I’m actually reckoning the sheep are out there, but the fire area wasn’t very wide, largely because of the efforts of the bombers,” Mr de Fegely said.

The fire is believed to have burnt across about 90 properties, affecting about 30 farmers.

“It impacted around Moyston which does have a lot of small landholders.”

Pasture regrowth will be inadequate for weeks

He said recent rain had put a green tinge across the fire ground, but this grass was weeks away from being suitable for grazing sheep.

About six semi loads of hay had been donated, but more would be needed, Mr de Fegely said.

“Unfortunately several big hay stacks went up in the fire and people’s reserves have been depleted.”

Many farmers would not comply with grant criteria

Despite the announcement of state and federal government emergency relief grants for up to $32,000, Mr de Fegely said many people would not qualify under the stringent criteria.

“You don’t get support if you’ve got insurance or good income so that cuts a lot of people out.

“If could get support for freight we would get more fodder.”