In the June update to its 2019 Sheep Industry Projections, MLA market intelligence manager Scott Tolmie said 2019 lamb production is expected fall 7 percent year-on-year to 477,000 tonnes carcase weight and mutton production is forecast to be 12pc lower than in 2018, at 199,000 tonnes.

“Overall forecast annual lamb slaughter remains unchanged from the January projections, at 21.2 million head, down 7pc on 2018, while annual sheep slaughter has been revised slightly upwards and is now expected to fall 11pc year-on-year, to 8.5 million head,” he said.

MLA is forecasting Australia’s sheep flock to fall to 65.8 million head by June 2019, down 6.8pc year-on-year and the largest year-on-year decline since 2008.

It said the contraction is being driven by ongoing drought in all key sheep production regions and heightened sheep slaughter, with many producers now running significantly reduced flocks. 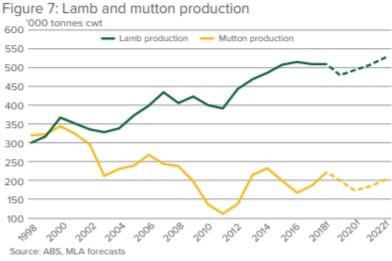 Mr Tolmie said the combination of generally low lambing rates and a poor weather outlook for winter is expected to disrupt lamb supply in the coming months.

“Throughout 2019, rainfall has been insufficient in all key sheep production regions, compounding the effects of an extended two-year period of rainfall deficiencies.

“On the whole, New South Wales remains the worst affected with 99pc of the State still drought-declared and many producers relying solely on supplementary feeding programs to maintain flocks,” Mr Tolmie said.

“Elsewhere, very few regions across South Australia, Western Australia and Victoria have been immune to the poor conditions.

“Forming a crucial component of Australian sheep meat production, the absence of winter rain in these States may lead to a disruption in spring lamb supply, similar to what was experienced in 2018,” he said.

“The dry conditions have led to sheep slaughter remaining elevated so far in 2019. However, there has been an easing trend through autumn and a slow-down is expected in the second half of the year as producers look to maintain their core breeding flocks,” Mr Tolmie said.

Focusing on demand, Mr Tolmie said the outlook remains positive for the industry.

“Despite the drought, both lamb and mutton prices have reached record highs in the last 12 months.

“This has been underpinned by strong demand for Australia’s sheep meat exports, which continue to push new highs, bolstered by a declining Australian dollar and limited competition.

“The growth in demand, particularly from China and the United States, has translated into strong domestic farmgate prices, with the national mutton indicator breaking through 600c/kg cwt in May for the first time and lamb prices quickly closing in on the record highs of August 2018,” Mr Tolmie said. 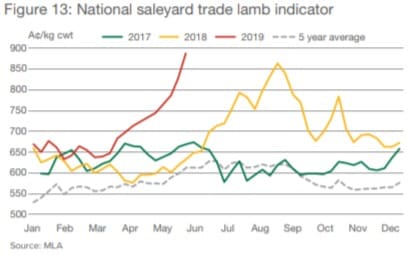 “The national saleyard trade lamb indicator opened the year at 657c/kg and has since advanced to 888c/kg, 40pc above year-ago levels.”

“Despite an elevated start to the year, exports are forecast to contract throughout the remainder of the year as supply tightens.