A six-week rest from grazing is best for lucerne, VIC trials find 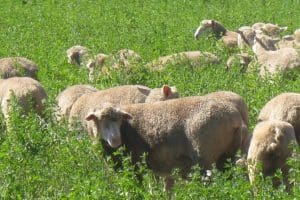 LUCERNE likes a six-week rest from grazing, Victorian researchers have found in trials at Hamilton and Rutherglen.

Agriculture Victoria researchers at Rutherglen and Hamilton have been putting lucerne to the test, and upgrading the guidelines for grazing lucerne in extensive dryland farming systems.

“Our research from both sites found that cutting every six weeks allows the lucerne plants to replenish taproot reserves while producing optimum feed for livestock.

“At both sites, the six-week rest led to a more productive pasture in terms of both dry matter production and forage quality, than the three other treatments,” Dr Mitchell said.

“This six-week rest increased dry matter production by up to 2 tonnes/hectare over other grazing practices.

“The lucerne experiments were established at both Rutherglen and Hamilton sites, being contrasting rainfall environments for livestock production,” she said.

“A simple six-week rest between grazings is better than previous recommendations, which included the appearance of new shoots or achieving 10 percent flowering in a lucerne paddock; both of these recommendations were highly subjective.

“Rest periods of six weeks allow plants to replenish taproot reserves; six weeks is a better and simpler guideline than the appearance of new shoots or flowering.”

Lucerne has a large tap-root that stores carbohydrates for regrowth after grazing; improving the persistence of lucerne plants is therefore about allowing plants to recover in order to replenish the store.

“Plants that are highly winter-active require close observation to ensure the crown of the plant is not damaged when grazed.

“Grazing periods of about 7-10 days are recommended,” she said.

“To minimise the animal health risks when lucerne is grazed, we recommend not to introduce hungry or unaccustomed sheep to lucerne, and first allow them access to other pasture or hay.”