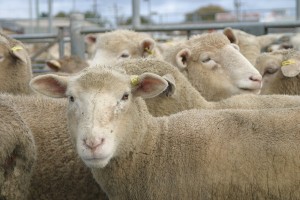 The lower prices kept supplies out of some markets in areas with good seasons, but buyers bid strongly for quality in the larger yardings where producers cut numbers or when extra competition pushed rates.

AuctionsPlus market operations manager Tony Benson said new season lamb prices were yet to show a full recovery on the drop a few weeks ago and were steady on last week.

“Though this may indeed be the price mark in the short term until bigger numbers stabilise the market.”

Sheep buyers were increasingly selective, as fairer quality lines are turned off as the dry winter persists.

“The sheen has finally come off the market for older scanned ewes, with those able to restock at present thinking beyond this spring.” (See the latest AuctionsPlus market report in Sheep Central’s markets pages here)

Most New South Wales lamb and sheep saleyards mid-week yarded fewer stock, including at Goulburn on Wednesday, where the National Livestock Reporting Service said numbers dropped 1200 to 1600, with a limited selection of new season and well-finished trade lambs.

With some buyers absent, most lambs eased around $5/head, though better finished trade weights averaged $9 a head dearer, to be firm for weight and quality.

Sheep and lamb numbers dropped at Wagga on Thursday, as producers reacted to last week’s cheaper trend, NLRS said. There were 25,700 lambs, down 4100 and 7900 sheep, down 3100, including reasonable trade lamb supplies and 6850 new season lambs.

Heavy lambs were in limited supply, not all major export companies operated fully. The 24kg-26kg lambs sold a few dollars dearer, while extra heavy lambs lifted $4 to $9/head to average 506c/kg cwt, with the best making from $144-$174/head.

NLRS said numbers and prices lifted at Griffith on Friday, up 5108 to 14,600 for lambs and up 1621 to 5000 for sheep, including 6000 mostly well-finished new season lambs. penned, with most well finished. The usual buyers were present and competing in a dearer market.

At Cowra on Friday, lamb and sheep numbers lifted with 3700 well-finished young lambs. Light new season lambs to restockers averaged $43-$78, with medium and heavy trade weights firm at around 526c/kg cwt. Most heavy trade weights made $115-$123/head. The heavy weight young lambs were firm at around 503c/kg cwt, with a pen of 26kg lambs making $134.50.

In Victoria, with the new season lamb turnoff barely started and a good season, sheep and lamb numbers were down, except for at Shepparton.

Sheep averaged 310c/kg cwt with most medium to heavy weights selling for $70-$90.

Sheep sold from $28 to a top of $82.50/head for extra heavy crossbreds, with the few pens of better lines of Merino and crossbred mutton estimated at around 310c/kg cwt, NLRS said.

Very few lambs were suitable for processors, with most pens fillwed with Merinos suitable for restockers and feeders.