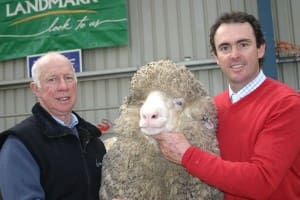 Half semen marketing rights will be retained by Pemcaw, with Kerrsville retaining the ram and a 40 per cent share.

Pemcaw stud principal Henry Armstrong said the ram’s win at the Australian Sheep and Wool Show in Bendigo last month gave interest a bit of momentum before the Hamilton sale.

The August-shorn ram was carrying an 18.5 micron fleece, with a co-efficient of variation of 15.1, standard deviation of 2.8 and comfort factor of 99.5 per cent. Its sire was Moorundie Park B100.

Mr Plush said he liked the ram’s fleece length, especially on his hindquarters.

“For his micron he is going to cut us a lot of wool.”

“They’ve been a terrific choice.

“I think they have given us a good line of sheep to work with,” he said.

“I think he shows what we are trying to do – to get a nice white nourished stylish wool onto the pollies.

“I had hoped for that sort of money, but you never know.

“I didn’t want to give him away because it costs a lot of money for us to AI and buy rams for ourselves.”

Other top sales at the auction included the One Oak selling a 14-month-old shortwool ram for $15,000 to Scott Pickering from Derella Downs Merino stud, Esperance, Western Australia.

All but five of the 30 Dohne rams sold for up to $4000 and Blackwood Performance sold Corriedale rams for up to $2000, to the New Zealand Strathblane stud.

“I think we are kicking goals.

“For an industry lacking a bit of confidence, it’s a bloody good result.”