THE forward wool market remains thinly traded despite a welcome return to positive territory for all Merino types at auction this week.

Prices rose 30 to 50 cents on Tuesday but lost a little ground on the close Wednesday. Crossbreds remain unloved losing 10 cents for the week indicating that stocks along the pipeline remain the concern. Pleasingly the passed in rate dropped below 10% with 30 of the 33,000 bales on offer finding a home.

The forward market remains thinly traded, with most forward trades going through around cash, except for the fine end, where growers were happy to give up a discount to get some hedge cover. The 17 micron contract traded at 2400 cents for November and 2325 cents for March 22. These levels relate to the 83rd and 78th percentile of prices for the last decade.

Probably just as important in the sellers’ minds is the volatility that the last 12 months has delivered. This time last year the 17 micron contract closed the week at 1394 cents — $10 dollars under today. Although 17 micron did rise to 1820 cents by November and 2095 cents by March, the hedge levels attained this week still stack up on examination.

From a basis point of view, it would still appear that for the superfine grower the strategy would remain to hedge 17 micron at a discount rather than 19 micron at a premium. The forward basis is still running at 650 to 700 cents well above the two-year average of 400 cents and the long-term average of 288 cents.

For the fine and medium wool grower, the curve looks relatively flat to cash, with the best value still  looking like the autumn 19 micron contracts that are still bid at a 30-cent premium to cash at 1700 cents.

We expect the forward market to hold at the indicative levels prior to the opening of auction sales next week. 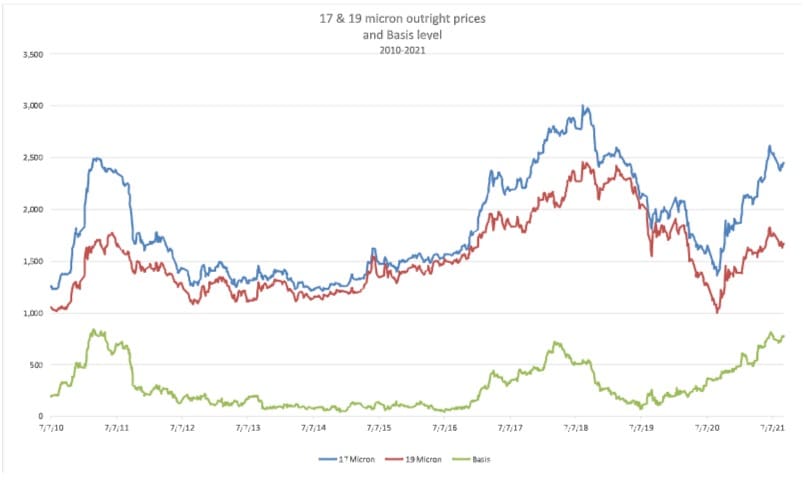 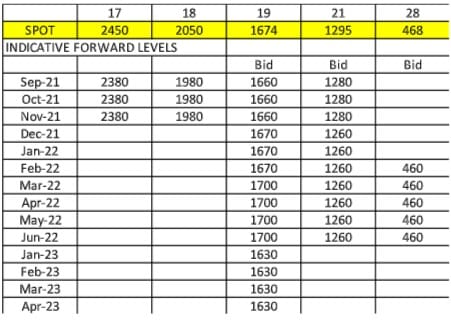